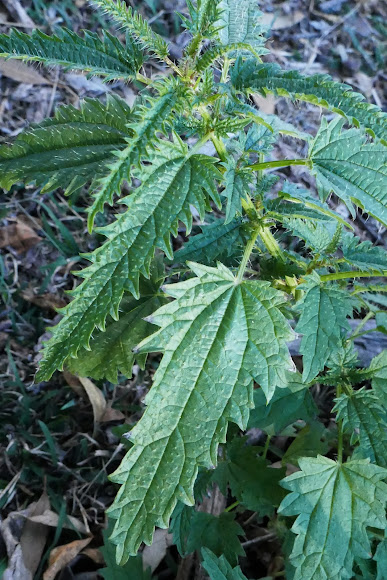 Urtica incisa, also commonly called "scrub nettle" and "tall nettle", is an upright perennial herb native to streams and rainforests of far north Queensland, eastern and southern Australia, but also found in Tasmania, south-eastern South Australia, and parts of southern Western Australia. Everything about these plants says "go away!" as they are covered in small stinging hairs (which are more like barbs). They are the epitome of evil, and yes, they do sting! I guinea pigged myself in the name of science and touched a plant with my hand. My ID is absolutely correct. PS: Not to be confused with Urtica dioica and its subspecies, also known as "common nettle" and "stinging nettle", although they are members of the same genus.

Indigenous Australians ate the leaves after baking them between hot stones. They are considered a tasty vegetable, with colonists also using it to make a tonic for "clearing the blood" - Low, Tim (1988). Wild Food Plants of Australia. Urtication, flogging with nettles, is a traditional European method of treating rheumatism. The same therapy was found in Aboriginal medicine - Cribb.(1981).