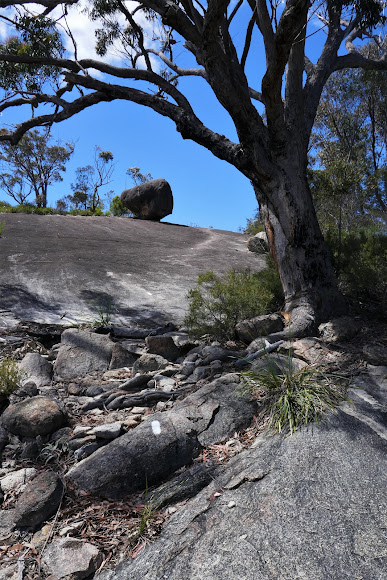 Youman's Stringybark is an Australian native eucalypt that belongs to the family Myrtaceae. It's a common local species in Girraween, and trees can grow upwards of 20 m high. The bark is grey to reddish-brown, and it has a stringy texture, hence the name. I didn't think to look for any resin that may be exuding from the bark, but I'll make a point of it next time. White flowers in winter provide a nectar source for birds and bees. This is a very hardy evergreen species that has adapted to extreme conditions that are synonymous with this region - drought, storms, snow, fires, heat, etc.

Locally frequent but distribution is usually restricted to moderately high altitudes of the NSW northern tablelands, with this immediate area of southeast Queensland forming its northernmost range. Trees are found in sclerophyll woodlands on poor skeletal soils on rises of shale or acid volcanics, as well as the clefts of massive granite outcrops. This spotting was on the slopes of Mt. Norman - one of dozens of extremely large granite monoliths in Girraween National Park. Here's some park info - http://www.rymich.com/girraween/

The trees in this spotting really caught my eye. I was starting my climb up the rocky granite slopes of Mt. Norman when the first tree came into view. Initially it looked as if it was growing straight out of the rock, but the photos reveal some of the root structure, and how the trees have taken hold along the cracks and crevices. Over time, dirt, ash and debris has accumulated around the roots forming the basis of soil, allowing other plants like shrubs and grasses to also get a foothold. It forms its own little ecosystem in what would otherwise be barren rock. It obviously works well for this and the other trees nearby, as they are all reasonably large, healthy trees. Please note that much of Australia is still in drought, despite recent rains, so it just goes to show how hardy this species is. PS: Massive fires swept through Girraween 2 months later, in mid-February, 2019, and it will take years to regenerate. Everything you see in these photos has been burnt to a cinder, and I can't help but feel sad for the wildlife that has been destroyed because of one careless human act.