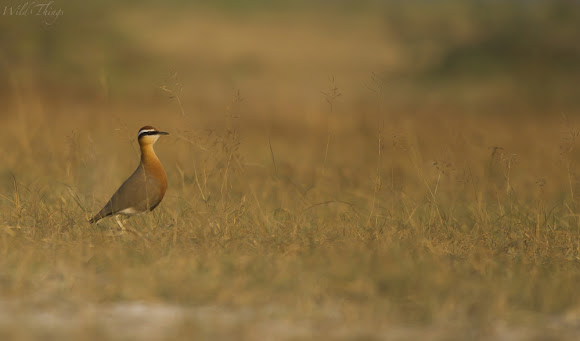 This bird was on my wish list since the past 4 years and when my guide told me that he had seen them near Nalsarovar, I was so excited that I rushed early in the morning to Nalsarovar with only agenda in my mind: get some pics of this bird. When we started searching for these birds in some fields near Nalsarovar I found out that there might be new-borns of these birds around and since I did not want to scare the birds, I decided to do something that I have always loved to do: hide and watch. We spotted a couple very soon and we lied down in the open and I started watching through my cam, taking some occasional pics. The birds were very far and it was not possible to get good pics so I started noticing their behaviour and here is what I noticed: the birds were moving around in grass which was not taller then them and the movement was a very well co-ordinated one – just like the military guys from some Hollywood movie. Out of the two birds, one would keep a watch by keeping its head above the grass and the second one would stoop down in the grass and would start walking towards the place where we were lying, occasionally picking up something to eat. After a few paces the second bird would pop out its head and the first one would stoop and take a few paces towards us. This ritual would follow and there was hardly any time when both the birds’s heads were out in the open. When they came out in the open I got a few shots but they were quick enough to hide back in the grasses due to some commotion on the nearby road. After they left we watched to see any signs of the new-borns but there were none present. Even the couple was far from us and there were no new-borns around them. We left after seeing them vanish in the grasses.

The second pic shows the way the bird was stooping in the grass and will also give you a feel of the distance between us, this was shot at 400mm. The last pic shows how they used to keep vigil by keeping their heads above the grass and also shows the birds habitat. Better quality pic at: http://www.flickr.com/photos/satyenmehta...

Beautiful photo again, glad you were able to see a bird that was on your wish list for so long :)

Yes Hema, they were very vigilant. Thanks Antonio. I did not know that this was the only spotting of Indian Courser on PN. Thanks for the information :)

Wow !Satyen awesome capture,it's the only spotting of this species on PN,the photos are very good to,congrats and thanks for sharing these amazing Indian biodiversity

looks like these are very vigilant birds. Making it quite impossible to find their young.

Thanks for clearing my ignorance!