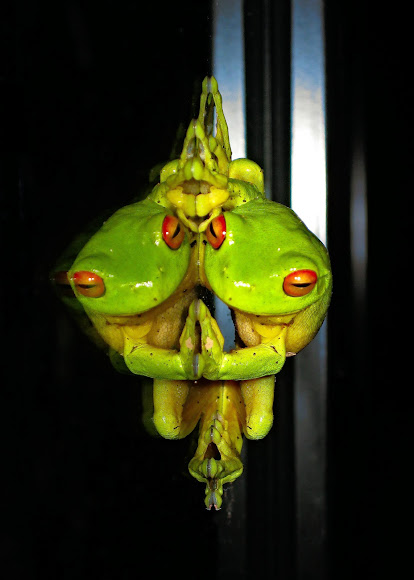 This is a Red-eyed Tree Frog, a very small frog that could just about fit into a matchbox, but the noise generated from such a small creature is astounding. In fact, it is deafening! They are lime green in colour with large red eyes, and a big yellow/orange throat.

These frogs are Australian natives and have scattered distribution along the Queensland and New South Wales coastline, from Prosperine in the north to mid-eastern New South Wales. Usually associated with coastal rainforests or wet sclerophyll forests. It spends much of its life high in the trees and is usually only seen in association with heavy rain when it descends to breed. Also found in association with flooded drains, water tanks and quarries at this time. Breeding is in spring and summer (October – February) after heavy rain when they congregate in and around flooded areas and mountain streams. Calling, amplexus and oviposition occurs in permanent and semi-permanent shallow pools in or besides streams and eggs are laid singly or in small clumps entangled in vegetation. (Basic information taken from amphibiaweb.org) This and the other photos in this series were taken in a friend's backyard in Tamborine Mountain QLD Australia, and there were several frogs having a swim in the backyard swimming pool. They are quite adaptable to take advantage of such conveniences, but their greatest threat is habitat loss.

With the exception of very ‘minor’ contrast adjustments, gentle sharpening and some spot cleaning of the glass, this photo is pretty much straight out of the camera. The background (fence post) has been gently softened with a gaussian blur to eliminate some grain noise. Other than that, I didn’t have to do much to it at all, the whole process taking no more than 10 minutes. The other photos in this series have also had minimal editing. The photos were taken at night with a flash. It was pitch black so I was surprised to get any decent images at all. As I rarely do any flash photography, these were a very pleasant surprise.

Olympic Park and surrounding wetlands are interesting, but the area is very industrial. Take Mosquito repellent!!!!!! I was eaten alive! Great Ocean Rd is a lovely area, but a very long and tiring daytrip. Phillip Island and Wilson's Prom are worth a look too. The Dandenongs are closer to the Melb CBD, and it's a very pretty area with lots of walking trails. An easy alternative. Hope you have a brilliant trip :)

Yeah, I'd like Brisbane too. I guess I have to reserve a time for a trip on our own(we're traveling with my mom this roound) We were thinking of the ferry to Olympic park/bicentenniel park. I believe our tour already does a swing around the harbor. In the Southern cities we're getting very little in the way of wildlife watching, but we do have a full free day in Melbourne: trying to decide between an optional bushwalk somewhere(the tour info doesn't say) or taking one of the day tours along the Great Ocean rd.

No Brisbane? So sad. Well I'm from Sydney, and there's lots around that you can do quite easily. I love the ferries, and you can move around quickly with those. Taronga Zoo is worth a look, I love Manly and North Head, Rose Bay and South Head. Darling Harbour good for access and walking (very touristy though). Try doing chopper of sea plane ride around harbour and along coast. That is awesome!

Sydney, Adelaide and Melbourne. We're also heading to Palm Cove, Alice Springs and Uluru - although our free time in those spots are pretty limited. I know I'll do a bit of late evening walking about in those three. We have half and full days in Sydney and Melbourne and a half day in Adelaide. Need to explore via foot or public transit. The St Kilda Penguins are on our agenda for part of the Melbourne 1/2 day

Where are you visiting exactly. I might be able to help with some ideas, particularly for areas from Sydney to Brisbane.

Thank you. Heading to your country on a tour in Dec... was getting a feel for possibilities for our downtime and some urban spotting

Oh my, this was my first post on PN three and a half years ago. How time flies. Thanks, Karen.

Nice! I'm going to reflect on this for a few minutes.

Thanks, Pam and Joseph. The real one is on the right, and he's besotted with the one on the left ;-)

Neil, you are so lucky to have such an event! Its a beautiful photograph! :But which is the real one? :))

A wonderful comment, Patty. Thank you. My very best to you and all the kids at St. George's School :-)

Thanks for your comments, folks. I've not seen the little guys for a while, but I know they're there. I can hear them!!

Thanks for your comments, Patty. The frog is on a glass pool fence, and I didn't know I had captured the reflection until I uploaded these photos to my PC. If I ever have the opportunity, I will try to get them on video. Even though these are little guys, you should hear their call. It is ((( LOUD ))). Best wishes to all in Form II Yellow Class at Saint George`s School. Neil :-)

Wow! It is extraordinary! A frog with a big swollen throat! It is enormous! Congratulations! They are very sweet! And very strange! And strong!
Beautiful! Form II Yellow . Saint Geroge's School. Group 2

Cute frog! I love frogs! Frogs are very important for planet Earth. This frog is on a mirror. It is extraordinary! These pictures are beautiful. The frog is strange too.
Form II Yellow Class from Saint George`s School.