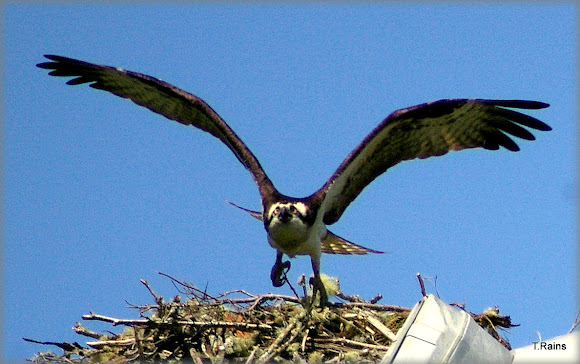 Osprey are large birds with black hooked beaks and yellow eyes,a white head with a black or dark brown eye stripe curving down the neck. Throat, chest and underparts are white. Back and wings are dark brown. Wings are mottled white and brown beneath if observed in flight. Legs and feet are pale or white with black claws.

The Osprey are widespread,nearly worldwide in distribution. Osprey are found in coastal regions or near large areas of open water such as rivers, estuaries and lakes with thriving fish populations. Osprey can tolerate a wide variety of habitats,nesting in locations near a body of water that can provide a food supply.

This Osprey is one of a breeding pair that occupy a nest in Hoquiam,Wa near the bay and other large bodies of water. The pair of Osprey are building,adding to their nest with branches carried in flight from forest and field near the nest. Sometimes a third Osprey appears and a bird fight ensues with loud cries and aggressive flight swoops over the nest. Once when the female Osprey left the nest a male Osprey ate one of the young. After this act the pair mated again. The pair are attentively nesting together now. If any of their young have survived, the young should be about 30 days old as of May 10,2013. I observed these Osprey each eating 1 small minnow near sunset hours,daily. Nest arranging is done in the afternoon. Nest gathering, building is done by the female in the evening after hunting,feeding and grooming. A nest material branch carried by the Osprey is about 12 inches long. A flight round trip to get a branch or nest material is about 15 minutes. A flight from the nest to hunt and return to the nest is approximately 40 minutes per bird. The landing where the catch is eaten is on the ground near their nest. If the hunt was successful the Osprey will eat 1/3 of a minnow on the ground(15 minutes) and take 2/3 to the nest. Other times an Osprey will completely consume a minnow on the ground(30 minutes) at the landing before returning to the nest. The catch minnow is usually 4-6 inches long and silver. Sometimes the Osprey's catch will be a dark green color aquatic creature with a larger,short body and no shimmer. If a Osprey approaches while another Osprey is eating it will quickly clutch his or her meal and fly in large circles,shrieking loudly. (From my observances of Osprey. March 03,2013-May 10,2013 Hoquiam,Wa)

Thank you Ava T-B for the invite. Yes,I am happy to add this spotting to your mission.