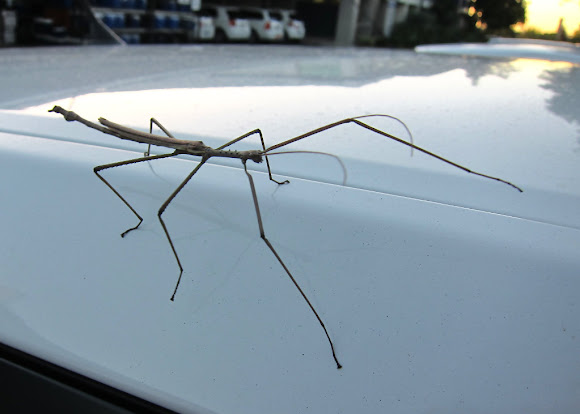 The Tessellated Stick Insect is a not very large but common species of stick insect endemic to the Brisbane area of Australia. They are brown-grey in colour and are about 150mm long (female) and males are 120mm long. The males have longer antennae than the females. The name comes from the dark black tessellations, which resemble small spines on the thorax. Short-winged females and long-winged males, so obviously the males are capable of flight and females are not. Eggs are tiny (3mm), shiny black with white captullum. This species usually feeds on eucalyptus, but also adapts to other trees and grasses. Most other species of stick insects usually are low in population, but this species is known to occur in plague proportion from time to time.

I spotted this specimen on top of a car, beneath a tree, from which it had most likely fallen. Species of tree unknown. but it was not a eucalypt.

Here's a female I spotted elsewhere in Brisbane - http://www.projectnoah.org/spottings/208...