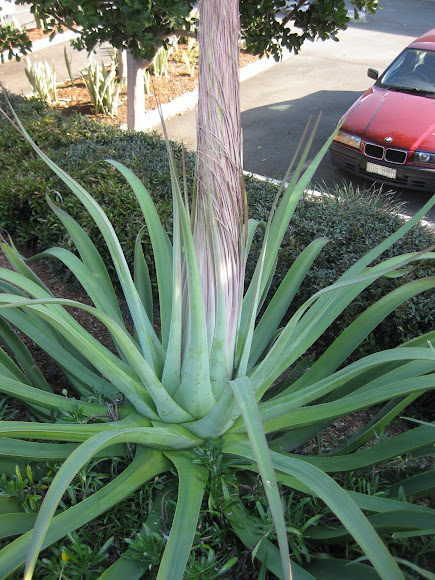 Agaves are succulents with a large rosette of thick, fleshy leaves, each ending generally in a sharp point and with a spiny margin; the stout stem is usually short, the leaves apparently springing from the root. Chiefly Mexican, agaves are also native to the southern and western United States and central and tropical South America. The Octopus Agave has been given its name for obvious reasons - it looks like an octopus! It is a common misconception that agaves are cacti. They are not related to cacti, nor are they closely related to Aloe whose leaves are similar in appearance.

It grows well in a dry climate, but equally well in subtropics to tropics. They do well in the various Australian climate zones.

These are the most amazing plants to witness when they flower. A large bloom spike or 'mast' emerges and grows upwards of 12-15 feet, yellow flowers bloom, and then baby plantlets (suckers) cling to stalk after the mother plant has died. The plantlets then fall to the ground and root. There were dozens of agave plants growing in the area where these photos were taken, although only half grew the mast and flowered.

It's amazing how plants move around the world! This one is native here where i live, and there it is in Australia! Here's mine: http://www.projectnoah.org/spottings/716...