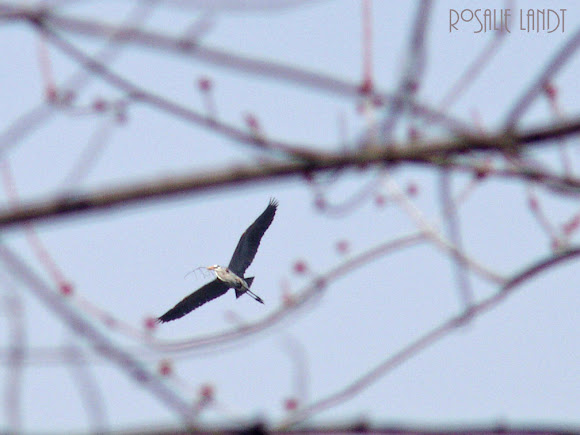 The Great Blue Heron is a regular summer resident in Minnesota. It begins its return from the wintering grounds in the southern U.S. and northern South America in early March and continues to arrive into May (Ehrlich et al. 1988, Janssen 1987). Great Blue Herons are common throughout the state, becoming fewer in number in heavily wooded areas, especially the northern regions (Janssen 1987). Overall, they are distributed across North America from southern Canada to Mexico (Peterson 1980). Great Blue Herons begin leaving Minnesota as early as late July and migration may continue through December; some may remain in the southeastern part of the state into February (Janssen 1987) where open water remains.

Great Blue Herons are dependent not only upon mature trees in riparian areas for colony sites, but also upon the juxtaposition of these colony sites with quality foraging areas. Furthermore, these sites must be insulated from human disturbance. A quarter mile radius buffer around the colony should be kept free of human disturbance (Hoover and Wills 1984). Forest management practices which result in the loss of current colony sites will obviously have negative effects on Great Blue Heron populations. Hoover and Wills (1984) suggest managing for 150 acres of disturbance-free nesting habitat with suitable feeding areas nearby. An area of this size would presumably support a minimum population of about 20 herons. Less obvious, but also important, are losses which may occur to future colony sites. The nesting activity by herons eventually results in the death and decay of their nest trees. Because these dead trees are not permanent landscape features (especially in riparian areas), the loss of potential future colony sites must be considered for appropriate management of Great Blue Heron populations. Nest tree losses may be successfully offset by the addition of artificial nesting platforms.

I was lucky enough to capture some nesting activities of these Great Blue Herons on an island in Fridley on the Mississippi River. Unfortunately this particular rookery was destroyed by a tornado in 2011; but there is another one on an island further south on the river. This series is to show the nesting platforms and stick carrying, landing and take off of these very long necked and legged birds! Almost every nest had a heron while the mate would go retrieve branches. It was a lot of fun watching them!