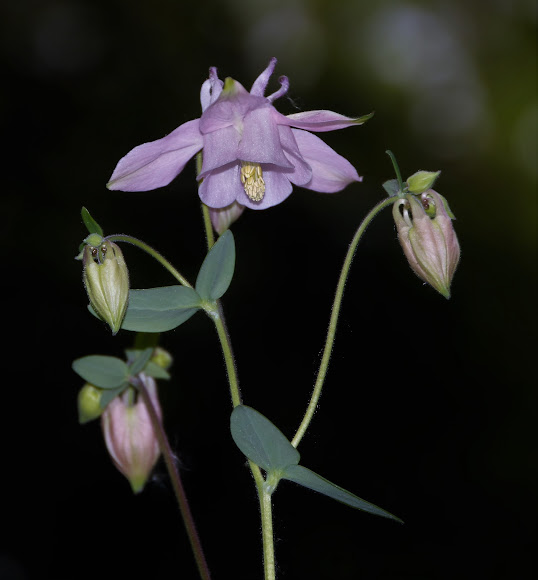 My second surprise was to find the Columbine of these colors - depending on the light, flowers appeared pale blue, pinkish or pale rose... The European Columbine is also known as Common Columbine or Granny's nightcap or Granny's bonnet. Specimens encountered here were some 100 to 110cm tall and produce branched stems with numerous flowers (normally dark blue - see my previous spotting here: http://www.projectnoah.org/spottings/162...), somewhat resembling a sleeping bonnet, which explains the name. Flowers, pendant or horizontal, are unmistakable by their form with long spurs pointing mainly upwards. Flowers are hermaphrodites, and the pollination done by bees and bumble-bees.

My first surprise was to find a large group of Columbines, almost forming a massif, around our building in semi-urban setting (close to town center, but equally close to a meadow/pasture and to a forest) - up to now I was seeing these flowers mainly on slopes of our mountains, and never in large groups. This massif of Columbines was found in a part of the garden that was not really entertained for some time (or at least it looks that way), apparently on purpose, and is full of wildflowers this spring.

It seems that the plant contains a mildly toxic glucoside of hydrogen cyanide, which is used in medicine. It was ascertained that, like many members of the family, all parts of the plant are poisonous if ingested. Its concoctions were successfully used to control lice.

Wow. Thank you all for this pleasant surprise. Cheers!

Beautiful series,perfect spotting Zlatan,congrats on the well deserved SOTD and thanks for sharing

Congratulations Zlatan, your European Columbine is our Spotting of the Day! With a special thanks for your notes.

"This graceful European Columbine (Aquilegia vulgaris) is our Spotting of the Day! Look carefully at the base of the main flower and you will notice long spurs extending out. These spurs contain nectar that attracts pollinators, and are a feature of all columbine flowers (genus Aquilegia), a group of about 70 species. Each species has spurs the length of which is tailored to the length of that species’ pollinator's tongue or proboscis, whether it be a hummingbird, moth or bee. Aquilegia vulgaris is mainly visited by bumblebees (Bombus sp.)".