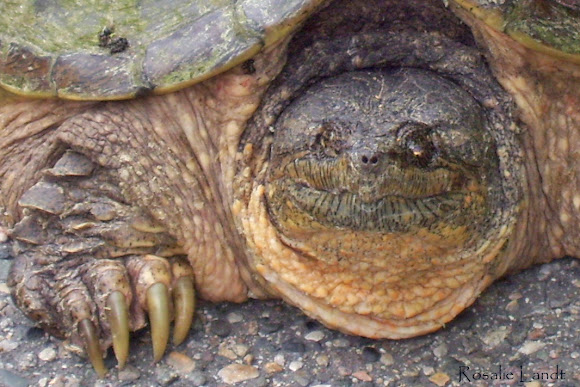 The common snapping turtle occurs throughout the eastern United States and southern Canada. It is found in a wide variety of aquatic habitats throughout Minnesota (not reflected on range map). Despite its widespread occurrence, several factors prompted concern for the snapping turtle's status in Minnesota and led to its listing as a special concern species in 1984. The major factor is the unknown and possibly detrimental effects of commercial harvest on local populations. Common snapping turtles are harvested for their meat, and used for human consumption. The Minnesota DNR allows licensees to take an unlimited number of adults, provided that the carapace length is greater than 30.5 cm (12 in.). Complicating the situation is the fact that peak harvest often occurs in June, which coincides with annual egg-laying activities. Because females are long-lived and reproduce for 5-10 years (sometimes longer) once they obtain a minimum carapace length of 25 cm (10 in.), there is the potential that intense harvesting may significantly affect local breeding populations. Harvest figures are also high in early spring and late autumn when common snapping turtles are together in communal hibernacula. These areas are susceptible to over-trapping. The effect of environmental contaminants is an additional concern. Helwig and Hora (1983) found high levels of PCBs (polychlorinated biphenyls) in the fat of common snapping turtles residing in the Mississippi River below the Twin Cities. The effect of these contaminats on the turtles' reproductive capacity is unknown. Description The common snapping turtle is Minnesota's largest turtle. As an adult, its upper shell (carapace) averages 20-36 cm (8-14 in.) in length and its weight ranges from 4.5-16 kg (10-35 lbs.). The largest known Minnesota individual weighed 29.5 kg (65 lbs.) and had a carapace that was 49.5 cm (19.5 in.) long. The common snapping turtle's carapace is variably colored from green to brown to black, and often has moss covering it. In young turtles, raised crests form three longitudinal keels along the carapace. These crests gradually disappear as the turtles mature. The back edge of the carapace in all sized turtles is strongly toothed. The lower shell (plastron) is considerably reduced in size relative to the upper shell, and provides little protection for the turtle. Common snapping turtles have a long tail with a series of raised scales along the top that create sawtooth projections. Their head is large, with large, powerful jaws, and their neck is long. The common snapping turtle is usually docile in the water, but can be aggressive when it is on land, often lunging forward and striking out to "snap" at its foe.

Common snapping turtles occur in virtually all aquatic habitats throughout the state, but prefer slow-moving, quiet waters with muddy bottoms and dense vegetation. They are common and often abundant in lakes, rivers, and marshes.

This snapper was sitting in the middle of the road inside Itasca State Park. I stopped to photograph this big turtle and the park ranger nearly ran us both down (he was going way too fast!) He drove around us, and I encouraged the turtle to keep on moving.

Thank you Maria. I have moved many and find with the big ones, a towel works really well to avoid being bit. :)

Nice spotting. Here is a video on moving snapping turtles in case you come across another one: http://www.youtube.com/watch?v=Lgd_B6iKP...

It was and I didn't dare try to pick it up so just herded it like cattle :)

cool! that was a BIG one.