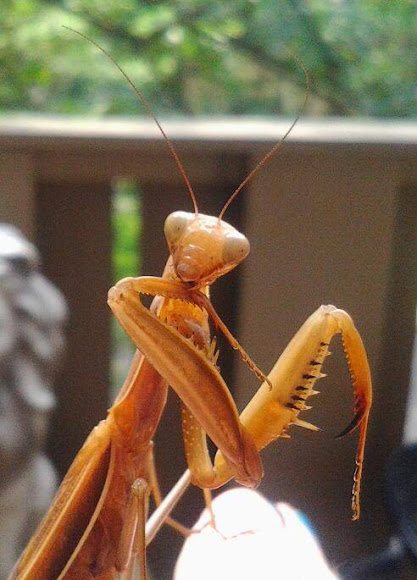 In Michigan, the hatching time is late May or early June. The nymphs are tiny versions of the adults without wings. They hatch by the hundreds and quickly disperse because they are cannibals. It takes six to eight molts for them to reach the adult stage. Mating and egg laying take place in September or early October. Contrary to popular belief the female does not always eat the male after mating with him. This rumor started when laboratory raised mantis were mated. The females had not been properly fed. If the female is hungry then she will try to make a meal out of her mate. It is estimated that 30% of the matings in nature end with the male being consumed.

Beautiful images! The scientific name for the European Mantis is Mantis religiosa.

I did my big zoology project on the Praying Mantis. They are my favorite bug! I love these shots. I wanted to get some really good photos of a tiny one just coming out of the nymph stage about a month ago, now that Barry has a phone with a really good camera on it, but I didn't hang onto him until he got home from work. I love macro, and wish I still had a good camera to work with. One thing I love about the mantis, is how amazing the species are across the world. My favorite are the pink and white ones that blend with orchids. lol

This guy was awesome, it hit the wall of our apartment complex so we took it upstairs and let it go on our balcony, this was just before we moved, litterally the day before we moved. He stayed there all night, this was taken the day we were moving, he stayed there all day the whole night and was there when we left, caught pictures of him eating too, or her. It was pretty cool, we thought about taking it with us, but we figured it had the shelter it needed from the balcony and all the bugs it could eat from the tree we had out front. So we left him/her there.

very nice! it almost looks like is looking right at the camera for you!