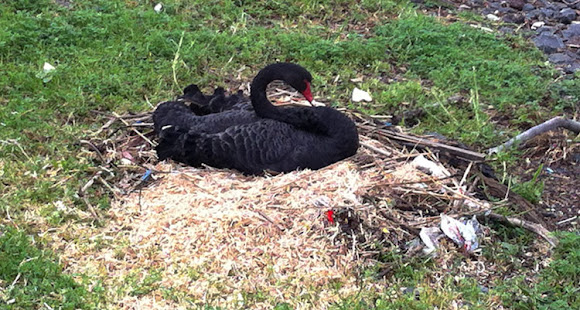 Large, black waterbird with elegant long neck and red bill seen on her nest incubating eggs. The black swan is a monogamus bird with loyalty to not only to each other but to good nesting grounds where they will return each year to raise a family of cygnets.

Usually fresh to brackish water wetlands. The nest would usually be on a mound on an island but this is no island with water only on one side. Either bold and experienced or just the opposite :/

This specimen is probably a female (pen) due to her lighter colouring and incubating behavior. A larger nearby solitary swan is most likely her mate (cob). They were found in a highly developed area of water in Port Phillip Bay, the Docklands. Her nest faces the Yarra River, which is fresh water. It was cordoned off to ensure passers by didn't disturb her. Docklands near Yarra River. At rest she lay her neck against her back with her bill nuzzled into her breast feathers. Shown in photographs grooming and waiting for me to go away...