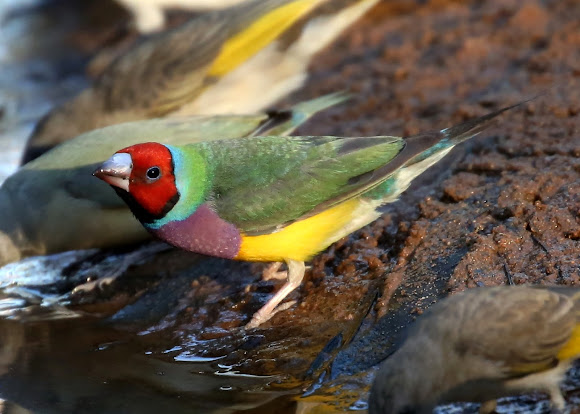 Also known as Lady Gouldian Finch or Rainbow Finch. This little bird is certainly one of the most beautiful finches. It comes in three main colour morphs in the wild. The Males all have a purple chest, bright yellow breast and white vent. The backs are grass green with a turquoise rump. The back of the neck is bright emerald green and the nape is also turquoise extending in a thin band around the throat. Where the colour morphs show is in the face colour. The most common being black, then red and occasionally a yellow face (shows as light orange). The tail is black with two longer filaments. The females are similar to the males but less bright in colouration.

Found in loose mixed flocks with other finches and honeyeaters in the north west of the Northern Territory of Australia. These birds were observed and photographed in a nearly dry stream bed being attracted to the few pools of fresh water in the early morning.

The main image is of a red faced male, then a black faced female and red faced male and finally red and black face males, a juv and an immature bird in the foreground. The great news for this species is that they have been up graded to Near Threatened from Endangered. Numbers in the Northern Territory seem to be stable and overall they are holding their own! Seeing these birds in the wild has always been on my bucket list and I can assure anyone who wishes to see one in the wild that they leave you breathless and are well worth the effort of early mornings and sitting in hides for hours!

My pleasure to share these beautiful birds Liana. Thank you for your comment and support for this,spotting.

Wonderful series Rob. I agree, seeing them in the wild does leave you breathless. Thank you for sharing your magical experience :)

Thank you Mark, it's good to hear from you.

Hi Marcin. Yes they are and even more so when you see the environment they live in with all the browns and greys and reds of the Northern Territory in the dry!

Marcin a year ago

Those colors are insane!!!

Congratulations on another worthy SOTD. A beautiful gem of a bird.

Thank you so much for the sotd. Thank you also to everyone that has left comments and liked this spotting. All much appreciated.

Congratulations...There is something so vulnerable ...so attractive...about birds (or any wild animal) at the watering hole.

Gorgeous series Robert,beautiful,great spotting,congrats on the well deserved SOTD and thanks for sharing these beautys

Congratulations Robert, your beautiful Gouldian Finches are our Spotting of the Day! Great series and informative notes as always :-)

"A strikingly colorful bird endemic to northern Australia, the Gouldian Finch (Erythrura gouldiae) is our Spotting of the Day! Named after English ornithologist and bird artist John Gould (1804-1881), the Gouldian finch comes in three distinct color morphs, with individuals having either a red, black or yellow head. This bird is not a true finch (family Fringillidae), and belongs to the family Estrildidae, found in the Old World tropics and in Australia".

Thank you Leuba. I appreciate your kind comments and support for this spotting.

Love everything about this spotting. The reflections on the water are just great. Thanks for sharing your wonderful experience Robert.

Thank you for the nomination Ashley. Thank you also Maria for your supportive comment.

Beautiful birds and great description of the variations!

Thank you Jim for your kind words and support of this spotting. The trouble with my bucket list is that I keep finding more stuff to put on it! :)

Stunning birds, great notes, and interesting spotting, Robert! That bucket list must be getting shorter...keep it up.

Thank you Rach and Daniele for your comments. Reaching the Wildlife Explorer patch is an achievement I am proud of and it's been a pleasure sharing with this whole community.

Thank you Maplemoth and Mark for your comments. It was superb up there Mark. I lived up there for a while 30 years ago and still love the place.

You've got them in all their variety! Great shots and notes Robert. Beautiful birds too :-)

Stunning little bird and great set of photos, as always.
See you have also gained your Nat Geo Wildlife Explorer. Congratulations on that, you have certainly shared some amazing wildlife from all corners of the globe. A pleasure to share in your exploits via your images.