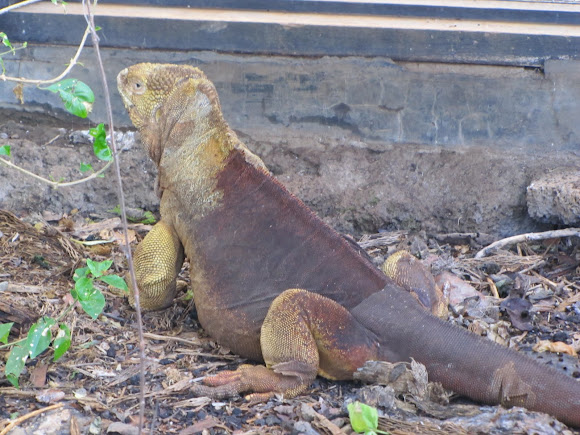 A species of lizard in the Iguanidae family. It is one of three species of the genus Conolophus. Charles Darwin described the Galapagos Land Iguana as "ugly animals, of a yellowish orange beneath, and of a brownish-red colour above: from their low facial angle they have a singularly stupid appearance." The Galapagos Land Iguana grows to a length of three to five feet with a body weight of up to twenty-five pounds, depending upon which island they are from. Being cold-blooded, they absorb heat from the sun by basking on volcanic rock, and at night sleep in burrows to conserve their body heat. These iguanas also enjoy a symbiotic relationship with birds; the birds remove parasites and ticks, providing relief to the iguanas and food for the birds. Land iguanas are primarily herbivorous; however, some individuals have shown that they are opportunistic carnivores supplementing their diet with insects, centipedes and carrion. Because fresh water is scarce on the islands it inhabits, the Galapagos Land Iguana obtains the majority of its moisture from the prickly-pear cactus that makes up 80% of its diet: fruit, flowers, pads, and even spines. During the rainy season it will drink from available standing pools of water and feast on yellow flowers of the genus Portulaca. It is estimated that the Galapagos Land Iguana has a 50 to 60-year lifespan.

It is endemic to the Galápagos Islands, primarily the islands of Fernandina, Isabela, Santa Cruz, North Seymour, Hood and South Plaza.