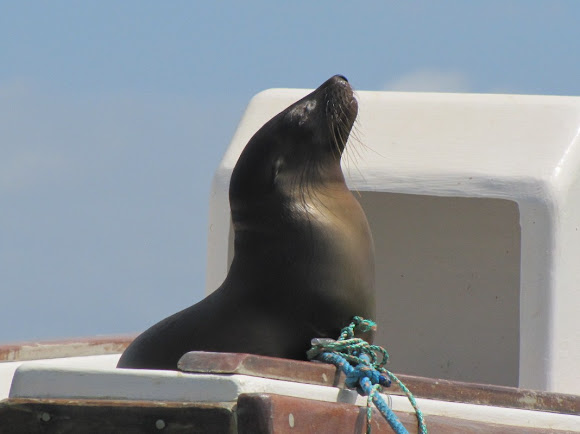 Galápagos Sea Lions range from 150 to 250 cm in length and weigh between 50 to 400 kg, with the males averaging larger than females. Adult males also tend to have a thicker, more robust neck, chest, and shoulders in comparison to their slender abdomen. Females are somewhat opposite males with a longer, more slender neck and thick torso. Once sexually mature, a male’s sagittal crest enlarges, forming a small, characteristic bump-like projection on their forehead. Galápagos Sea Lions, compared to California sea lions, have a slightly smaller sagittal crest and a shorter muzzle. Adult females and juveniles lack this physical characteristic altogether with a nearly flat head and little or no forehead. Being fairly social, and one of the most numerous species in the Galápagos archipelago, they are often spotted sun-bathing on sandy shores or rock groups or gliding gracefully through the surf. Their loud “bark”, playful nature, and graceful agility in water make them the “welcoming party” of the islands.