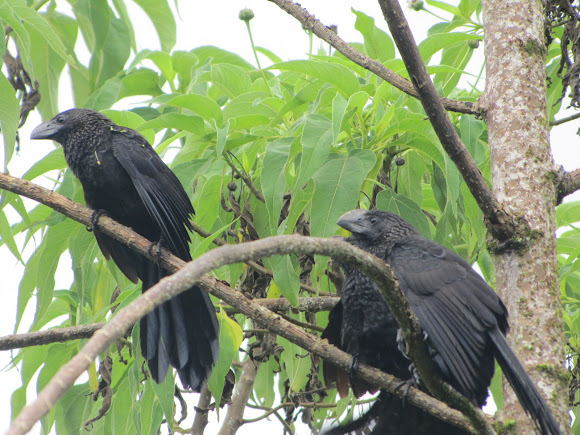 The Smooth-billed Ani is about 33 cm (13 in) long and weighs 95 g (3.4 oz). The adult is mainly flat black, with a long tail, deep ridged black bill and a brown iris. The flight is weak and wobbly, but the bird runs well and usually feeds on the ground. This is a very gregarious species, always found in noisy groups. The calls include a whining ooo-leeek. The Smooth-billed Ani feeds on termites, large insects and even lizards and frogs. They will occasionally remove ticks and other parasites from grazing animals. The nest, built communally by several pairs, is a deep cup lined with leaves and placed usually 2–6 m (6.6–20 ft) high in a tree. A number of females lay their chalky blue eggs in the nest and then share incubation and feeding. Each female is capable of laying up to seven eggs, and nests have been found containing up to 29 eggs, but it is rare for more than ten to hatch. Incubation is 13-15 days, with another 10 days to fledging. Up to three broods may be raised in a season, with the young of earlier broods helping to feed more recent chicks.

A large near passerine bird in the cuckoo family. It is a resident breeding species from southern Florida, the Bahamas, the Caribbean, parts of Central America, south to western Ecuador, Brazil, and northern Argentina. This ani is found in open and semi-open country and areas under cultivation.

Very noticeable birds, I remember them from a trip I undertook to Dominica in the W. Indes some 30 years ago