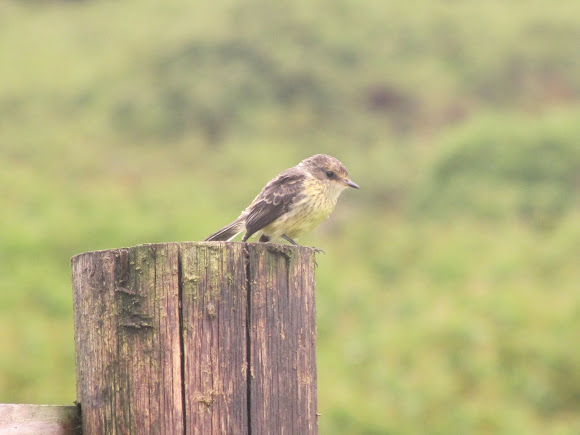 The species grows to about seven inches in length, and is strongly dimorphic; males are bright red in color, with dark brown plumage. Females have a peach-colored belly with a dark grey upperside, and are somewhat similar to Say's Phoebe. These tyrant flycatchers feed mostly on insects such as flies, grasshoppers and beetles. These are usually taken from mid-air, after a short sally flight from a perch. The Vermilion Flycatcher is a favorite among birders, but not generally kept by aviculturalists, as males tend to lose their bright colors when taken from the wild and kept in cages. Most flycatchers are rather drab in color, but the Vermilion Flycatcher is an exception and is very striking. They lay 2 - 3 whitish eggs in a nest made out of twigs, stems and roots lined with hair. The eggs are incubated for around 2 weeks by the female bird and the young are ready to leave the nest after 15 days of hatching.

Can be found in the southwestern United States, Central America, and northern and central South America, and southwards to central Argentina; also in the Galapagos Islands