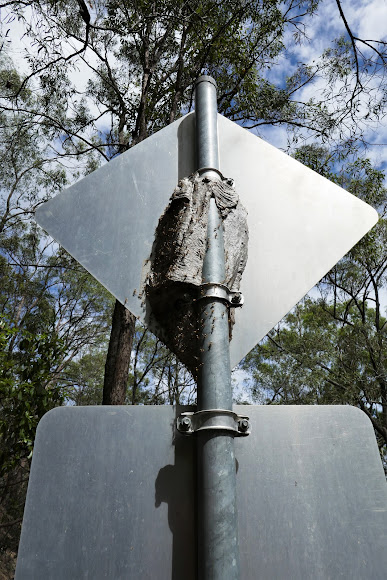 The Yellow Brown Paper Wasp is a native species of paper wasp found in Northern and Eastern Australia. R. romandi is a swarm-founding species, and manages perennial nests. Its nests are known as 'paper bag nests' and have different architectural structures depending on the substrates (ie: surface on which they are built), but there are multi-layered flat combs inside the structure, plus an overall outer covering. This wasp is small in size (around 12mm), although is quite capable of delivering a painful sting if provoked. Needless to say, I didn't provoke them, hence they seemed rather docile, but they can become aggressive during the swarming process, not only towards humans and non-nest mates, but also to each other. Hornets are known to raid their nests, and it has been found that they will abscond if their nest is destroyed, damaged, or continually disturbed. However, they tend to rebuild in the same spot or within close proximity to the original nest site. PS: Just a guess, but many of the individual wasps in this spotting appeared to be quite young. There was lots of wing-flapping, but very little flight when I observed them, and I watched them for several minutes. Perhaps these wasps were newly-hatched and were drying their wings in preparation for their first flight? Good luck.

Toohey Forest is a eucalyptus woodland reserve of approximately 655 hectares. The forest is situated within an urban area on the south side of Brisbane, within the city limits. This wasp colony was spotted on a sign post, situated on an access road into the reserve. https://www.brisbane.qld.gov.au/sites/de...

Everything you could ever want to know about this species can be found at the reference links.