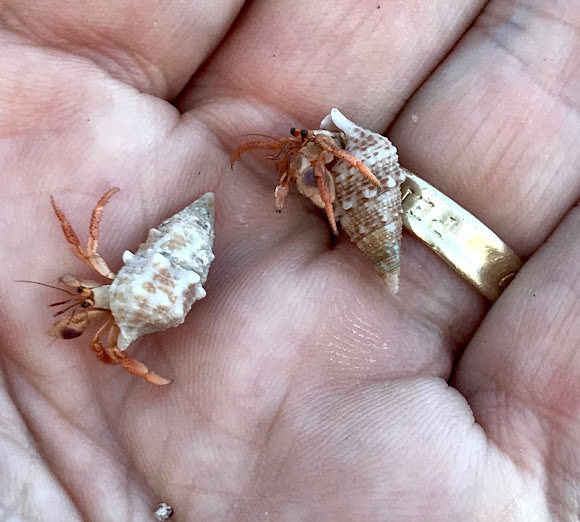 Most species have long, spirally curved abdomens, which are soft, unlike the hard, calcified abdomens seen in related crustaceans. The vulnerable abdomen is protected from predators by a salvaged empty seashell carried by the hermit crab, into which its whole body can retract. Most frequently, hermit crabs use the shells of sea snails (although the shells of bivalves and scaphopods and even hollow pieces of wood and stone are used by some species). The tip of the hermit crab's abdomen is adapted to clasp strongly onto the columella of the snail shell. Most hermit crabs are nocturnal.

At Cove Bay, near the sea shore, at the foot of the Volcano, Mount Scenery, on Saba in the Caribbean Sea. Off course released after photoshoot.

As the hermit crab grows in size, it must find a larger shell and abandon the previous one. Several hermit crab species, both terrestrial and marine, have been observed forming a vacancy chain to exchange shells. When an individual crab finds a new empty shell it will leave its own shell and inspect the vacant shell for size. If the shell is found to be too large, the crab goes back to its own shell and then waits by the vacant shell for up to 8 hours. As new crabs arrive they also inspect the shell and, if it is too big, wait with the others, forming a group of up to 20 individuals, holding onto each other in a line from the largest to the smallest crab. As soon as a crab arrives that is the right size for the vacant shell and claims it, leaving its old shell vacant, then all the crabs in the queue swiftly exchange shells in sequence, each one moving up to the next size. Hermit crabs often "gang up" on one of their species with what they perceive to be a better shell, and pry its shell away from it before competing for it until one takes it over. There are cases when sea shells are not available and hermit crabs will use alternatives such as tin cans or any other types of debris or even custom-made shells.

Super spotting Muckpuk,congrats on the well deserved SOTW and thanks for sharing.

Neil Ross a day ago

A wonderful spotting, Muckpuk. Congrats on your SOTW.

Thank you Sergio Monteiro, Brian38 and Ornithoptera80 for the congratulations!

Yippeeeee!
Thank you very much MichaelS and all other Rangers!
I am very honored!

Congratulations for the SOTW, Muckpuk.

Congratulations! Your hermit crab spotting has been voted Spotting of the Week! The Project Noah community looks forward to seeing your next nature discovery!

Thank you VERY much AntónioGinjaGinja!
Very honored to be considered!

Isn't it just amazing that as soon as you think you can't get surprised anymore, plop, pops up another amazing thing in nature.....a row of waiting hermitcrabs... hope to see that one day!