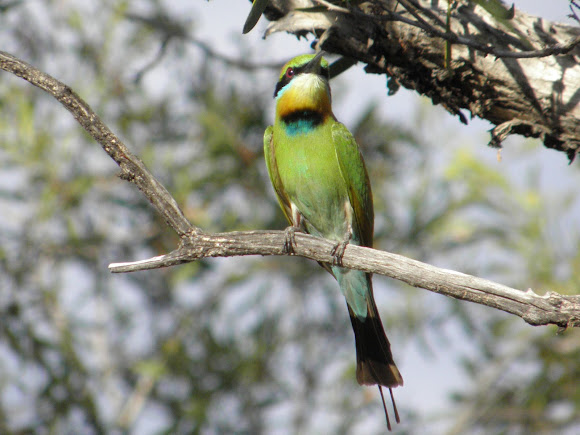 The Rainbow Bee-Eater is a spectacular bird. With its green, blue, chestnut and yellow plumage, its slim build, slender curved bill and distinctive streamers that extend from the end of its tail, it is simply beautiful. A striking, colourful bird, it has a golden crown and a red eye set in a wide black stripe from the base of the bill to the ears, which is edged with a thin blue line. The throat is orange-yellow, with a broad black band separating it from a green breast. The upperparts are green, with the flight feathers coppery and black tipped. The underwings are bright orange, with a black edge. The lower abdomen is blue. The tail is black, including the long tail streamers, with a blue tinge. Females have shorter, thicker tail streamers than males, but are otherwise similar.

Most often found in open forests, woodlands and shrublands, and cleared areas, usually near water as closed areas hinder aerial pursuit of insects. It will be found on farmland with remnant vegetation and in orchards and vineyards. It builds a nesting tunnel in soft, loamy soil but will also use disturbed sites such as quarries, cuttings and mines.

The first two photos are a female (short tail-streamers) and the second two photos are a male (longer tail-streamers). They are constantly calling as they fly, pursuing an insect or bee in a marvelous display of agility and speed. After catching their meal, they glide back to their landing and proceed to beat it against the wood or powerline before tucking in. This male and female were both more than happy to allow me to get quite close to take these pictures. My first reference for identification: The Michael Morcombe eGuide to Australian Birds, Mobile App. Second reference: http://birdlife.org.au/bird-profile/rain...

Thank you Nayeli! I'm so glad you like them :)

Thank you Barbara :) I was very lucky that they were content enough to sit still long enough for the shots and for me to get quite close! I was very surprised.

Thank you Marta. I'm so glad you enjoyed these pics. Rainbow Bee-eaters sure are lovely. I remember walking right by one (I hadn't seen it) and it called out until I finally saw it and acknowledged it! I will keep my fingers crossed for you that you will get to see them up close too :)

Wow! You also have a nice collection of bird spottings! This is a wonderful spotting of the bee eater! These birds are really beautiful. I wish one day I will get to see them up close like this :-)