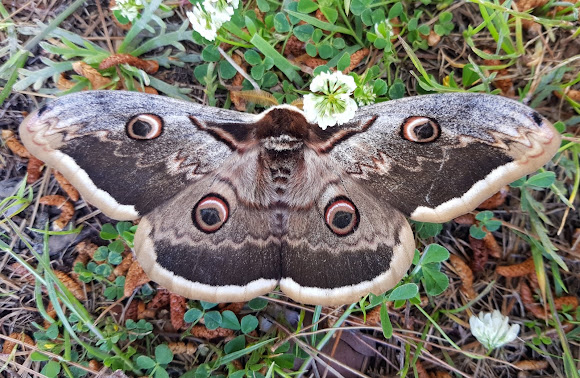 It is the largest European moth, with a wingspan reaching 15–20 cm. The identically marked and colored sexes are similar to Saturnia atlantica but differ in being larger and in having less concave outer margins to the forewings and areas of chocolate-brown on both wings and body. Most adults emerge in the late morning, with females calling that same night, often from the base of trees up which they have climbed. Pairing takes place just before midnight and lasts for about 22 hours. Depending on latitude and altitude, late March to the beginning of June as a single generation; however, odd individuals are sometimes found in late autumn (October). In central Europe, most are on the wing in mid to late May.

The giant peacock moth has a range that includes the Iberian Peninsula, southern France, northern Hungary, central and southern Serbia, Croatia, southern and eastern Bulgaria, southern Greece southern Turkey,western Syria, north Israel, southern Romania, Russia, Ukraine, Czech Republic, Slovak Republic, Macedonia and Italy and extends into Siberia and North Africa. This is a nocturnal species that inhabits open landscapes with scattered trees and shrubs, occurring from sea-level in western Europe to over 2000 m altitude in the Levant and Iran. Parkland, orchards and vineyards with shade-trees are particularly favoured.

Hello dear people, thank you for this award ;) Busy life of a researcher kept me away from the main ground for some days and this comes are a surprise :)
Thank you once again! Funny fact, this one was spotted by the sea on one of the annual coastal cleaning missions :) I'd like to believe it came to help us ;)

Congratulations injica! Great spotting! The markings on this moth are so intriguing.

Congratulations for the SOTD.

Beautiful capture injica,congrats on the well deserved SOTD and thanks for sharing

Congratulations, injica! Your fabulous moth has been selected as spotting of the day!

Today’s spotting of the day is the Peacock moth (Saturnia pyri)!
We are only one week out from National Moth Week 2019! National Moth Week is a global citizen science project aimed at promoting the importance of moths and their beauty. Join us July 20-28 by hosting or attending a moth night (public or private)!
Visit nationalmothweek.org for more information and register an event for free here: http://nationalmothweek.org/register-a-n....
https://www.projectnoah.org/spottings/60...