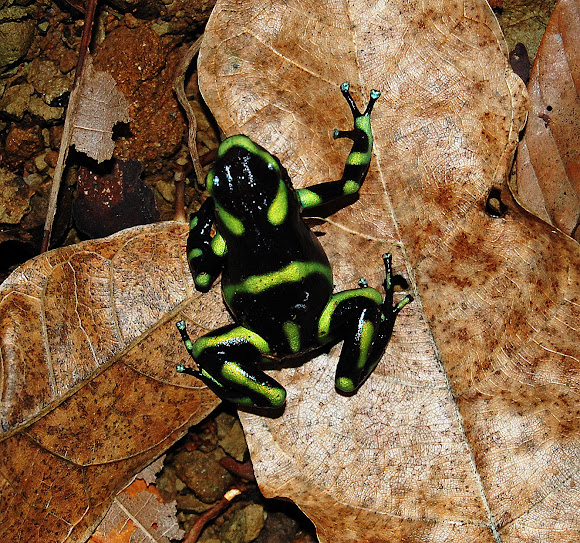 Pretty and tiny, but toxic! Dendrobates auratus, spotted here in the Corcovado National Park where they are quite common. Native to Central America and north-western parts of South America. Added to the "NWF: Watch for Wildlife" mission because of its highly adaptive defence mechanisms! Find out more in the notes.

These frogs will only release their poison when they feel threatened. The skin of dendrobates can secrete a variety of toxins including histrionicotoxins and pumiliotoxins. These toxins interfere with the transport of various ions across cell membranes and can affect vital processes such as muscle contraction. The type of toxins secreted by these frogs is affected by their environment. They can even take up a toxin from their prey and tweak the chemical to make it a more deadly weapon! http://www.pnas.org/content/92/1/9.full.... http://www.anapsid.org/dendrobtoxins.htm...

Thank you Mayra and zulkifly!

1 cool spotting.. and the frog is so tiny

Added to the "NWF: Watch for Wildlife" mission because of its highly adaptive defence mechanisms. Find out more in the notes!