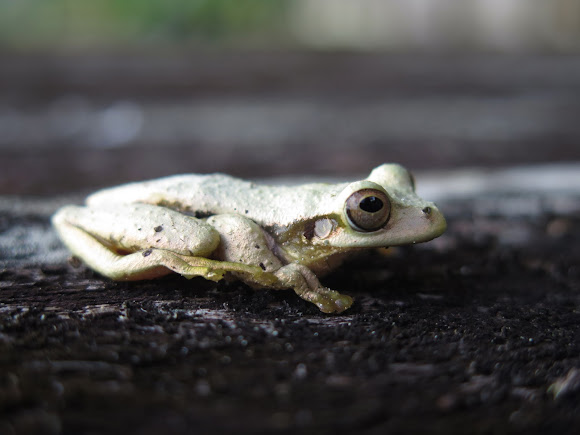 Dorsal coloration consists of brown blotches or tan spots that are variable to uniform, and the ventral surface is yellow (Savage and Heyer 1968). Upper limb is barred, an ivory stripe extends from seat to heel, and yellow or brown melanophores are scattered on the plantar foot surface and anterior/posterior thigh. Some individuals have blue-purple coloration on the flank and yellow groin spots. Coloration may be confused with Sordida puma, but absence of dark groin and flank reticulum, and absence of distinct light and dark foot to tarsal stripe in H. pseudopuma is diagnostic. Individuals may also be confused with Smilisca sordida, but bright yellow groin spots and brown or yellow posterior thigh of H. pseudopuma are characteristic differences. The dorsum is relatively smooth and the ventral surface is granular, and a series of warts may be present along the lower arm. The iris is gold and the pupil is horizontal, the tympanum is distinct, and the snout is rounded and truncate with a median projection in dorsal outline. Vomerine teeth arise at the level of the posterior choanae and extend posteriorly. Prepollex is not protuberant, fingers are approximately one-third webbed (vestigal between I and II) and bear large discs. Toes are about two-thirds webbed, and bear discs smaller than those of the fingers. Males have internal vocal sacs that are paired and lateral, and brown nuptial asperities extending to the thumb's disc (all information from Savage and Heyer 1968). The subspecies H. pseudopuma infuncata tends to be slightly larger than H. pseudopuma pseudopuma, but more diagnostic is the bluntly round snout (due to structural differences in the underlying premaxillaries) and red flash of color found on the thighs and webbing of H. pseudopuma infuncata (Duellman 1970). Males range in size from 37.6 to 42.9 mm, and the slightly larger females measure between 41.1 and 45.6 mm (Duellman 1970).

Declines have been reported for populations within the Monteverde region of Costa Rica's Cordillera de Tilaran, where an unprecedented crash led to the decline of 25 of 53 amphibian species during 1990 (Pounds et al. 1997). Here, where H. pseudopuma was found in the hundreds throughout the 1980s, the maximum number found was 43, significantly below the precrash levels (Pounds et al. 1997). The causal explanations that have been proposed have focused climatic factors in a direct or synergistic manner. Pounds and Crump (1994) proposed several climate-based hypotheses for other frogs effected within the area (namely Bufo periglenes and Atelopus varius): the moisture stress, temperature stress, climate-linked epidemic, and the climate-linked contaminant pulse hypothesis. More recent studies have linked Monteverde's declines to more subtle, but cumulative weather changes caused by global warming. Particularly, Pounds et al. (1999) analyzed precipitation, air temperature, sea surface temperature, and stream flow patterns in relation to communities of tropical anurans, birds, and anoline lizards. Their conclusions resolved that it was not simply the effect of the El Niño/Southern Oscillation, as Pounds and Crump (1994) had earlier hypothesized, but rather a larger warming trend (this trend remained significant with the El Niño fluctuations included) which crossed a threshold in late 1980's and precipitated a broad tropical anuran decline. Declines were evident in the anoline lizard communities as well, and the tropical avian communities underwent significant restructuring.