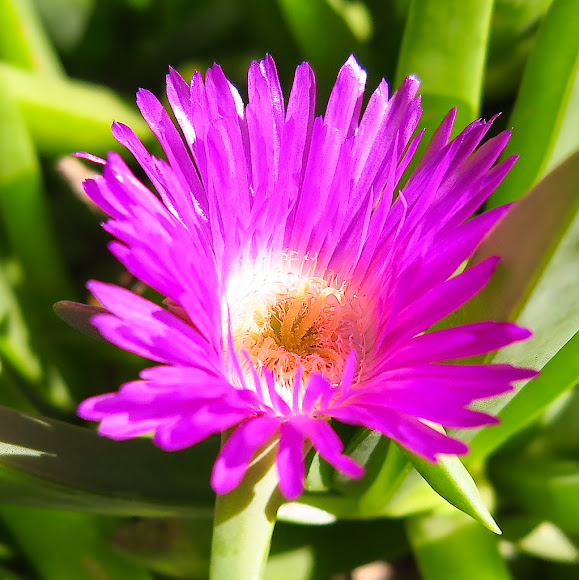 Carpobrotus glaucescens, known as Pigface or Angular Pigface, is a member of the Family Aizoaceae. It is a prostrate, creeping succulent, found growing naturally in coastal areas on sand dunes along the NSW and Queensland coast. There are 6 species of this genus that are native to Australia. It's very salt tolerant and is able to withstand salt spray, strong winds, and sand blast. As this wetland area is subject to tidal flooding, this spotting is well adapted to high-salt conditions, growing on sandy soil.

Boondall Wetlands Reserve - http://www.brisbane.qld.gov.au/environme... The trees in this spotting location are predominantly She-oak (casuarina) and Melaleuca species. This is on the very edge of a salt flat area, so the other dominant ground cover species is marine couch (grass).

Spotted with my PN buddies Shanna Bignell and Pamela Sai. Thank you both for such a wonderful day :-)

Oh, and in Australia, edible bush food is caller "bush tucker". If you know where to look, it is everywhere.

Thank you. There are a few Australian native species, but I think the bulk of species are from South Africa. I was there one spring in an are called the Little Karoo, and Pigface were everywhere! A truly magical sight to see.

This plant is used as a groundcover ornamental here and is found growing wild in coastal areas here as well. It is so neat to know where they are native. I've also known it to be edible, both stems and fruit. A sort of "bush food" or survival food. The name Carpobrotus comes from the Greek for "edible fruit".

hehehe, those butterflies surely can be frustrating! Lovely alternative...

This is when Shanna and yourself were stalking butterflies. They don't like me much, so I spotted me a Pigface instead. At least it was still and didn't frustrate me. This was in the same area, and is where Shanna told me to stick my hand in the hole. So cheeky! :-)