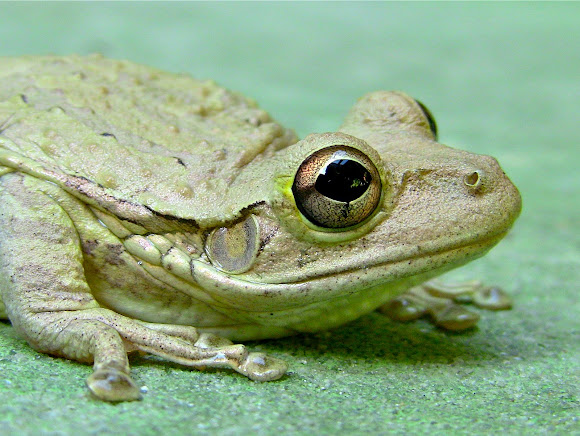 An amphibian native to the Caribbean region of the Western Hemisphere. It is the largest tree frog of North America. Their wide diet and ability to thrive amongst humans has made it a highly invasive species with established colonies in Northern Florida, the Hawaiian island of Oahu, and thorough the Caribbean Islands.[1] They range in size from 3 to 5.5 inches (76 to 140 mm) and vary in color from olive-brown, bronze, gray, or grayish-white. A nocturnal tree dwelling frog, they are known to eat almost anything that will fit in their mouth and to mate year-round. Their arrival in a new community is believed to be detrimental to local species and it has been suggested that these frogs be destroyed on sight upon their arrival in new habitats. Cuban tree frogs are commonly available as pets; however, because the animal secretes a toxic mucus from their skin that can cause a burning sensation in the eyes it is not an ideal pet. It is also believed that further distribution of the species has been expanded by the release of these pets.

The Cuban tree frog is native to Cuba, the Bahamas, and the Cayman Islands. This large frog has been introduced in Puerto Rico, the U.S. Virgin Islands, the British Virgin Islands, many islands of the Lesser Antilles, and Hawaii. There is debate over if the species was native to the Key West region of Florida, or if it was introduced to the area. First discovered in the 1930s, it is theorized that they might arrived on ships in the 1800s or could have made it to the area by natural means. They can survive in brackish water and this ability may have helped the species to spread to various islands. The Cuban tree frogs progressed colonization into the mainland of Florida is believed to be by use of Florida State Road A1A construction during the 1940s. The species is now established in southern Florida and parts of the panhandle region and can be found as far north as South Carolina.

This frog fell out of a canvas BBQ grill cover as I was moving it. He sat there for a long time letting me get close to photograph and video tape it. Eventually jumping into the bushes.

After downloading the ibook... "OUR WILD PLANET. Networked Organisms & Péter Horváth," I was surprised and thrilled to see that my Cuban Tree Frog spotting was on the chapter page for Amphibians. Thanks Project Noah for including my spotting!

Nice Laurie! I don't remember seeing a cuban tree frog so well....even when they were in my hand!!! Congrats on the spotting of the day!

Thank you Peter, for choosing my invasive little guy for the inaugural submission for the mission.

According to the University of Flordia, "Osteopilus septentrionalis" is an invasive species in Southwest Flordia.

We've made an effort to create awareness around this issue and have used your spotting as an inaugural submission.

Laurie Winters
Again a nice series like 'Black Skimmers', your spotting with video really help others to study, analyze and understand organisms in better way,
In this particular video the clarity of sound is also best.

Deservedly so--as prevalent as they are this is a great spotting!

Thanks, CJ and textless!

Wow, Spotting of the Day! Thank you, Peter!

Beautiful photos and interesting facts... a great Spotting of the Day! :)