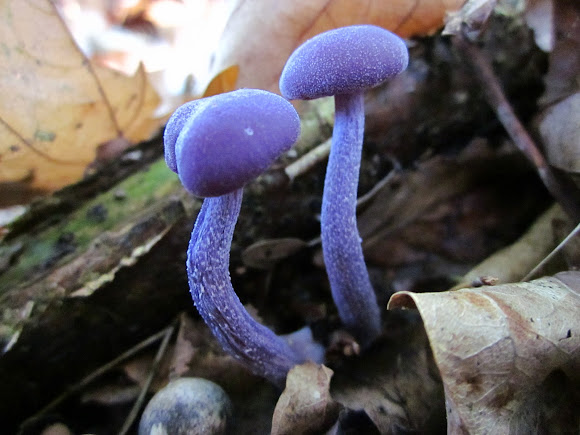 The cap is 1–6 cm in diameter, and is initially convex, later flattening, and often with a central depression (navel). When moist it is a deep purplish lilac, which fades upon drying out. It is sometimes slightly scurfy at the center, and has pale striations at the margin. --Electronmicroscopic image of spores of Laccaria amethystina The stem is the same colour as the cap, and has whitish fibrils at the base, which become mealy at the top. It is fibrous, hollow, fairly tough when rolled in the fingers, with dimensions of 0.6 to 7 centimetres (0.24 to 2.8 in) long by 0.1 to 0.7 centimetre (0.039 to 0.28 in) thick. The flesh is without a distinctive taste or smell, and is thin, with pale lilac coloration. The gills are colored as the cap, often quite distantly spaced, and are dusted by the white spores; their attachment to the stem is sinuate—having a concave indentation before attaching to the stem

L. amethystina is a common species in most temperate zones of Europe, Asia, Central, South, and eastern North America. It grows solitary to scattered with a variety of deciduous and coniferous trees, with which it is mycorrhizally associated, though it most commonly occurs with trees in the Fagales. It appears in late summer to early winter, and often with beech; in Central and South America, it more commonly grows in association with oak. Research has shown that L. amethystina is a so-called "ammonia fungus", an ecological classification referring to those fungi that grow abundantly on soil after the addition of ammonia, or other nitrogen-containing material; the congeneric species Laccaria bicolor is also an ammonia fungus

Laccaria amethystina, commonly known as the Amethyst Deceiver is a small brightly colored, edible mushroom, that grows in deciduous as well as coniferous forests. Because its bright amethyst coloration fades with age and weathering, it becomes difficult to identify, hence the common name ‘Deceiver’. This common name is shared with its close relation Laccaria laccata that also fades and weathers. It is found mainly in Northern temperate zones, though it is reported to occur in tropical Central and South America as well. Recently, some of the other species in the genus have been given the common name of "deceiver --As with other members of the genus Laccaria, this species is edible, though generally not considered a choice edible. While not inherently toxic, in soils that are polluted with arsenic, it can bioaccumulate a high concentration of that compound

you must be proud, really beautiful

thanks. and nok : ขอบคุณ

thank you all. and @ juan, i personly love the first picture. but the 3 is a really nice picture of a fading one. mostly they dont look so nice!

the third picture is awsome too, I dont know which I like better, between the first and the third

Thank you for this series showing the different ages of the mushroom. I just learned that there are probably over 1.3 million species of mushrooms in the world. No wonder I am having trouble identifying all of mine!!

Well, I walk my dog with me in the woods and she can certainly sniff out where other animals have urinated....thanks for the hint!

try your best, search for the right trees and then " maybe" a place where you suspect ammonia (animal pee), i love them myself. and this time with really full colors.And when i rethink at the finding-spotts, i can think of these places as a dog-walking area.many peoples who let their dogs out there. good luck!!

Very pretty..hope I can find some here in Flanders :-)

Wow, thank you for sharing

What a gorgeous tiny mushroom. It occurs in Eastern NA so maybe some day I will find it...thanks for sharing.

Lots of Information and a beautiful color.