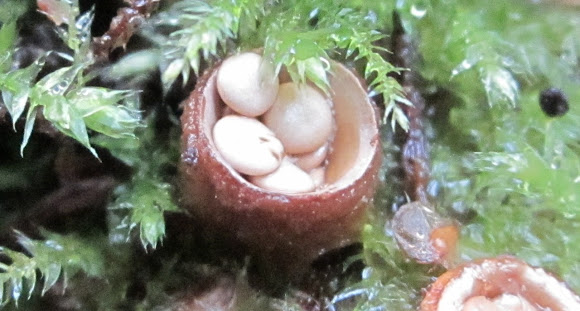 Crucibulum is a genus in the Nidulariaceae, a family of fungi whose fruiting bodies resemble tiny egg-filled bird's nests. Often called "splash cups", the fruiting bodies are adapted for spore dispersal by using the kinetic energy of falling drops of rain. The "eggs" inside the bird's nests (technically known as peridioles) are hard waxy shells containing spores, and tend to stick to whatever nearby herbage they land on, thus increasing the odds of being consumed and dispersed by herbivorous animals. Members of this genus are saprobic, obtaining nutrients from dead organic matter, and are typically found growing on decayed wood and wood debris. The three known Crucibulum species (C. laeve, C. parvulum, and C. cyathiforme) are distinguished from other genera of the Nidulariaceae by their relatively simple funiculus – a cord of hyphae that connects the peridiole (the "eggs") to the exterior of the bird's nest

Like other bird's nest fungi, Crucibulum species are saprobic and derive their nutrients from decomposing organic matter. They are typically found growing on wood and woody debris such as stems, twigs, wood chips, old nut shells, and old matting; they are sometimes found on "dried manure cakes". Brodie notes (of C. laeve) they are "never" found on soil or large logs. C. parvulum has been found on the roots and stems of old or dead dry land plants such as Juniperus horizontalis and Artemisa species. C. laeve, the most well-known species of Crucibulum, is a temperate-zone species with a circumpolar distribution. It has been collected in most European countries and the Canary Islands; in North America it has been found from Alaska to Mexico, while South American locations include Chile and Tierra del Fuego. It has also been found in Australia, Iceland, Japan, and New Zealand. C. parvulum has a primarily North American distribution, having been found in Alaska, southern Alberta Badlands, the Canadian Rocky Mountains and in semi-deserts of Idaho; in 2004 it was collected in China. C. cyathiforme is only known from Colombia—where it was discovered growing at an elevation of nearly 7000 feet (2146 metres)— and Armenia

Crucibulum laeve is probably the most common and frequently encountered Bird's Nest Fungus in temperate North America. Three features serve to identify it successfully: its yellowish colors; the "lid" over the nest (in young specimens), covering the eggs; and the tiny cords that attach the eggs to the nest. Observing this last feature requires some patience with a very tiny tool--say, a needle or a pin--and a hand lens. http://www.mushroomexpert.com/crucibulum...

I love these ones!

thanks for the warm words

I love your work Alex!

Very cool spotting!!!! Thank you so much for posting all of that information as well!! Quite the interesting read for certain!!!