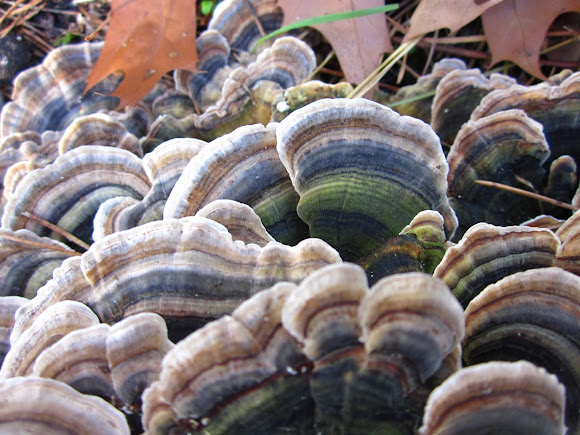 The top surface of the cap shows typical concentric zones of different colours. Flesh 1–3 mm thick, leathery texture. Cap with rust-brown or darker brown, sometimes blackish zones, Older specimens, such as the one pictured at right, can have zones with green algae growing on them, thus appearing green. Commonly grows in tiled layers. Cap flat, up to 8 x 5 x 0.5-1 centimeters, often triangular or round, with zones of fine hairs. Pore surface whitish to light brown, pores round and with age twisted and labyrinthine. 2-5 pores per millimeter

Trametes versicolor — formerly known as Coriolus versicolor and Polyporus versicolor — is an extremely common polypore mushroom which can be found throughout the world. Versicolor means 'of several colours' and it is true that this mushroom is found in a wide variety of different colours. T. versicolor is commonly called Turkey Tail because of its resemblance to the tail of the wild turkey. T. versicolor is recognized as a medicinal mushroom in Chinese medicine under the name yun zhi (simplified Chinese: 云芝, traditional Chinese: 雲芝). In China and Japan T. versicolor is used as in immunoadjuvant therapy for cancer

Alex i have a spot that i think is the same of this one, can you confirm me if this id is correct?thanks very much