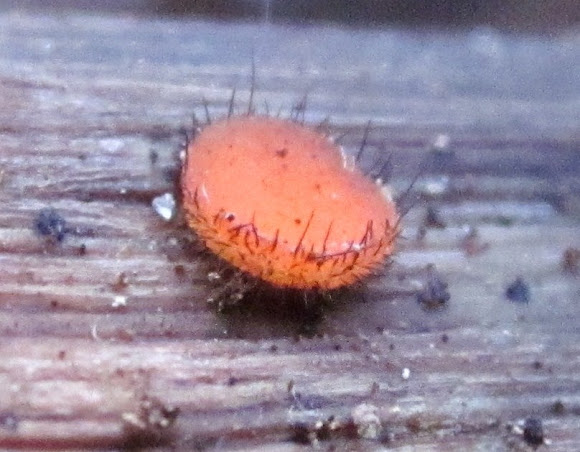 The fruiting body of S. scutellata is a shallow disc shape, typically between 0.2 to 1 cm (0.1 to 0.4 in) in diameter. The youngest specimens are almost entirely spherical; the cups open up and expand to a disc during maturity. The inner surface of the cup (the fertile spore-bearing surface, known as the hymenium) is bright orange-red, while the outer surface (the sterile surface) is pale brown. The flesh is red and thin. The outer surface is covered in dark coloured, stiff hairs, measuring up to 1 centimetre (0.4 in) in length. At the base, these hairs are up to 40 µm (0.0016 in) thick, and they taper towards the pointed apices. The hairs form distinctive "eyelashes" on the margin of the cup that are visible to the naked eye. or easily visible through a magnifying glass. S. scutellata is sessile—it does not have a stalk

S. scutellata is common in both Europe, where it can be found from late spring to late autumn, and North America, where it fruits in winter and spring. It has also been collected in Cameroon, Colombia, East Asia, India, Iceland, Israel, New Guinea and the Solomon Islands, Russia, and Turkey. A saprobic species, it grows generally in subalpine regions, fruiting on rotten wood and damp soil, and can also sometimes be found on ashes, wet leaves or bracket fungi. In Alaska it has been found growing on humus in the tundra. A six year study of the succession of fungal flora appearing on freshly cut stumps of Poplar trees (Populus canadensis) showed that S. scutellata appeared roughly in the middle of the fungal succession (about 2–4 years after the tree had been cut), along with the species Ascocoryne sarcoides, Scutellinia cervorum, and Lasiosphaeria spermoides. When growing on wood, it is often obscured by surrounding moss. Though sometimes found alone, they typically fruit in groups, sometimes forming dense clusters on rotting wood or other plant detritus. Due to its small size, it is often overlooked, but mycologist Vera Evenson has observed that "the discovery of the Eyelash Cup is always a great pleasure", due to "the beauty of the eyelashes". Vera McKnight describes it as "a most attractive little fungus", and claims it is easy to notice due to its bright colouration

Scutellinia scutellata, commonly known as the eyelash cup, the Molly eye-winker, the scarlet elf cap, the eyelash fungus or the eyelash pixie cup, is a small saprophytic fungus of the genus Scutellinia. It is the type species of Scutellinia, as well as being the most common and widespread. The fruiting bodies are small red cups with distinct long, dark hairs or "eyelashes". These eyelashes are the most distinctive feature and are easily visible with a magnifying glass. The species is common in North America and Europe, and has been recorded on every continent. S. scutellata is found on rotting wood and in other damp habitats, typically growing in small groups, sometimes forming clusters. It is sometimes described as inedible, but its small size means it is not suitable for culinary use. Despite this, it is popular among mushroom hunters due to its unusual "eyelash" hairs, making it memorable and easy to identify.

thanks all of you, i do my best,
@julie:i normaly get the pictures not so clear at this size, but i have found some kind of trick to increase the focus of the cameralenses. maybe till the camera focus has to be readjusted but in the meanwhile i get sharp pictures.

great photo Alex! I couldn't get that close with my camera in my recent spotting.

You see what others overlook...very nice!

i added another additional "cropped" picture. Quality are lesser but more (mass) to see