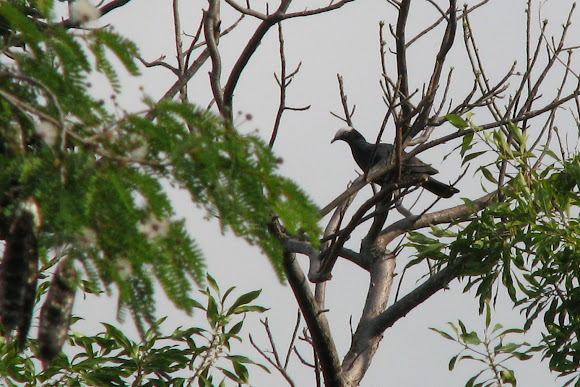 The White-crowned Pigeon (Patagioenas leucocephala), formerly Columba leucocephala) is a species of bird in the family Columbidae (doves and pigeons). It inhabits the northern and central Caribbean islands and some places on the North and Central American mainland. The adult is dark grey, with green and white bars on the nape, a brilliant white crown to the head, a white iris, and a pale-tipped red bill. It is a resident breeder mainly in the Bahamas, Cuba, Jamaica and Antigua. It breeds in smaller numbers in Hispaniola, Puerto Rico, the Virgin Islands, the Cayman Islands, Anguilla and other Caribbean islands. It also breeds along the Caribbean coast of Central America. In the United States it is found only in the Florida Keys and the southern tip of mainland Florida. In Florida a major cause of mortality is collision with man-made objects. Another main threat to this species is loss of habitat. The White-crowned Pigeon needs two distinct habitats, one for nesting and one for feeding. They typically breed in coastal red mangroves (Rhizophora mangle), which continue to be clear-cut for crops such as sugarcane. Agriculture and deforestation have become a problem for the species' feeding grounds, typically inland hardwood forests. The bird is very skittish, and is known to simply abandon its nest when it is encroached upon. (credit: http://en.wikipedia.org/wiki/White-crown...)