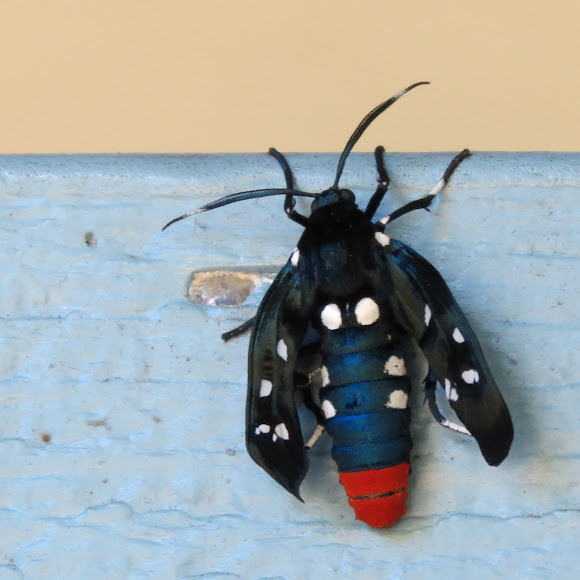 The Polka-Dot Wasp Moth (Syntomeida epilais) is a species of moth thought to be native to the Caribbean. The species is also called the Oleander Moth after the Oleander plant, from which its young feed. Like most wasp moths, these moths are day fliers. They prefer neotropic areas, to which they are native. The North American subspecies is S. epilais jucundissima, which is locally common in all areas of Florida, and has been seen as far north as Savannah, GA They are dark metallic blue with a couple of white polka-dots dotting the wings and upper abdomen. The tip of the moth's abdomen is bright red; it looks like a very dangerous wasp, but in fact is a harmless moth.The caterpillars are orange or dark orange with long black hairs. The caterpillars look dangerous, but the setae do not inflict any harm. The larvae stage of the Polka-Dot wasp moth, commonly called the Oleander caterpillar, is widely known for its gluttonous appetite. The caterpillar feeds in almost any location (excepting California) where its food, the Oleander plant, can be found. They are gregarious and can cause damage from minor to severe. (Credit: http://en.wikipedia.org/wiki/Syntomeida_...)

this is a beauty! Perfect representation of the color blue!