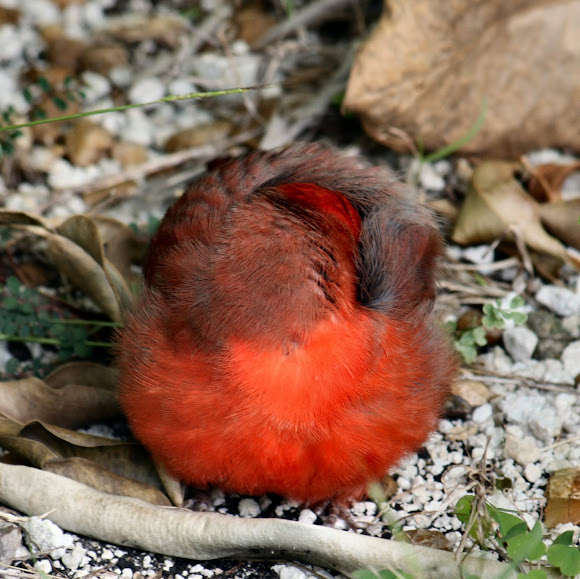 Male Northern Cardinal (Cardinalis cardinalis) spotted rolled up into a ball on the ground after an unusually cold night in Key Largo, Florida. I found it mid-morning and assume it was on the ground all night - out in the open. I observed (and photographed) it for about 20 mins before it roused from its deep sleep and, after a few minutes, flew off with no apparent ill effects. I always wondered what his wife thought about his staying out all night.

The Northern Cardinal or Redbird or Common Cardinal (Cardinalis cardinalis) is a North American bird in the genus Cardinalis. It can be found in southern Canada, through the eastern United States from Maine to Texas and south through Mexico. It is found in woodlands, gardens, shrublands, and swamps. The Northern Cardinal is a mid-sized songbird with a body length of 21 centimeters. It has a distinctive crest on the head and a mask on the face which is black in the male and gray in the female. The male is a vibrant red, while the female is a dull red-brown shade. The Northern Cardinal is mainly granivorous, but also feeds on insects and fruit. The male behaves territorially, marking out his territory with song. During courtship, the male feeds seed to the female beak-to-beak. A clutch of three to four eggs is laid, and two to four clutches are produced each year. The Northern Cardinal is a mid-sized songbird with a body length of 20–23 cm (7.9–9.1 in) and a wingspan of 25–31 cm (9.8–12 in). It weighs about 45 g (1.6 oz). The male is slightly larger than the female. The male is a brilliant crimson red with a black face mask over the eyes, extending to the upper chest. The color is dullest on the back and wings.[7] The female is fawn, with mostly grayish-brown tones and a slight reddish tint on the wings, the crest, and the tail feathers. The face mask of the female is gray to black and is less defined than that of the male. Both sexes possess prominent raised crests and bright coral-colored beaks. The beak is cone-shaped and strong. (Credit: http://en.wikipedia.org/wiki/Northern_Ca...)

Lovely story & cute shots! I love to see the birds all fluffed up against the cold!

Wow. I never saw a bird sleeping like that on the ground. Great shots.

lol! I love the story along with these pics.....it's a great capture!

I should have added: the cardinal woke up and after a few minutes flew off with no apparent ill effects. I found it mid-morning and assume it was on the ground all night - out in the open. I observed (and photographed) it for about 20 mins before it roused from its deep sleep. I always wondered what his wife thought about his staying out all night.

I have Cardinals scavenging seeds and whatever else they find off the ground all the time, but I have never seen them curled up like that. They only stay on the ground for a few seconds, pick a bit, and they might, if it's a crowded feeder area, stay for about a minute or two if the other birds/squirrels/chipmunks are all behaving "normally."

he doesnt look too healthy, most birds (especially songbirds) avoid the ground

Was he fluffing his feathers?

I've never seen a bird rolled up like that! Did you see him warm up and fly away?