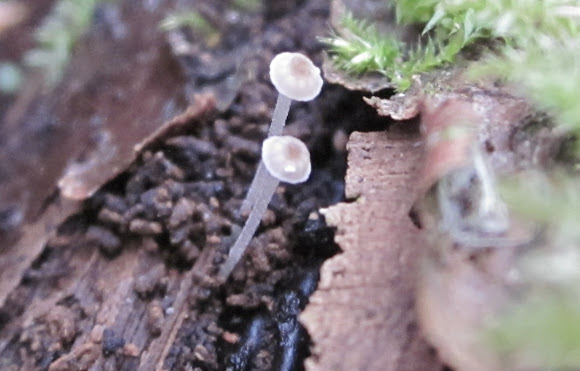 The cap is white and small, with a diameter typically ranging from 0.25 to 0.75 cm (0.1 to 0.3 in). Initially convex to cucullate (hood-shaped), it flattens during maturity, developing visible surface grooves that correspond to the gills underneath the cap; the surface may also be covered with glistening particles, remnants of the partial veil. The cap color is pallid gray with a whitish margin when young, but soon becomes white overall. The flesh is membranous and fragile. The gills are free or attached to the stem by a line; they are broad, distantly-spaced, sometimes adhering to each other to form a slight collar around the stem, and white throughout their development. The stem is 0.5 to 2 cm (0.2 to 0.8 in) long, and usually curved and threadlike. The base is enlarged into a slight bulb, which is initially nearly spherical. The variety carpophila is characterized by its white cap up to 1 mm in diameter, and narrowly conical caulocystidia (cystidia found on the stem).

Fruit bodies of Mycena adscendens are found scattered to grouped together on twigs, bark, and woody debris of conifers and hardwoods during the spring and autumn. They are also found growing on hazel nuts that have fallen to the ground; two other Mycenas known to grow on this substrate include M discopus and M. nucicola. In the United States, it is distributed from Washington to California. It is also found in Europe, and has been collected in Amasya Province, Turkey

Mycena adscendens, commonly known as the frosty bonnet, is a species of fungus in the Mycenaceae family. The fungus produces small fruit bodies (mushrooms) with caps up to 3.5 mm (0.14 in) in diameter, supported by thin stems up to 2 cm (0.8 in) long ---The mushroom is commonly known as the "frosty bonnet". The specific epithet adscendens is derived from the Latin word for "ascending".