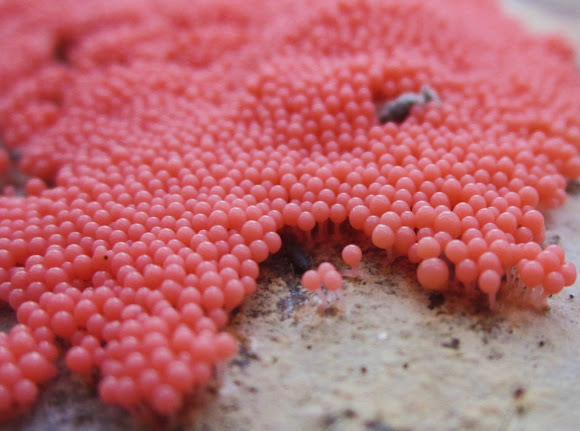 An often easy to recognise family as the spore mass is typically brightly coloured, producing stalked or sessile sporangia. A capillitium often consisting of tubular threads branching at wide angles, smooth or ornamented with spines, warts, cog-like prominences or half-rings, free or attached threadlike elements --- ( http://www.hiddenforest.co.nz/slime/inde... ) ------- Slime mold or mould is a broad term describing protists that use spores to reproduce. Slime molds were formerly classified as fungi, but are no longer considered part of this kingdom. Their common name refers to part of some of these organisms' life cycles where they can appear as gelatinous "slime". This is mostly seen with the myxomycetes, which are the only macroscopic slime molds. Slime molds have been found all over the world and feed on microorganisms that live in any type of dead plant material. For this reason, these organisms are usually found in soil, lawns, and on the forest floor, commonly on deciduous logs. However, in tropical areas they are also common on inflorescences, fruits and in aerial situations (e.g., in the canopy of trees) and also grow in air conditioners, especially when the drain is blocked. In urban areas, they are found on mulch or even in the leaf mold in gutters. One of the most commonly encountered slime molds is the yellow Physarum polycephalum, found both in nature in forests in temperate zones, as well as in classrooms and laboratories. Most slime molds are smaller than a few centimeters, but some species may reach sizes of up to several square meters and masses of up to 30 grams. Many have striking colours such as yellow, brown and white ( http://en.wikipedia.org/wiki/Slime_mold ) {---- the last pictures is from 3 days later}

I have found this in Niagara Falls, Ontario, Canada. Didn't know what it was.

hi jolly, maybe well, just south from the phillippines are some sighted ( http://www.discoverlife.org/mp/20q?searc... )

Beautiful... the clarity and combination of colors !! and most knowledgeable comments.

Nice spotting. I don't think we have it here in our place.

thx people, for this found had i very much luck (right time, right location and also spotted )

Hey Alex, I know it has been a crazy past few weeks on the fungi and slime mold front, but I hope we can convince you stay with us. You've been an incredible resource to many people including myself and if you left I think many people would miss out on the opportunity to learn about the incredible species you document so well. It's a shame that Clive left the community since he had a great deal of wisdom, but the truth is I don't think Clive would have been satisfied even if we changed our site to Project Fungi :) Additionally, I'm sure Lars keeps telling you and everyone else in the general chat room about how our site is "not good" and we'll be the first to admit that it's not perfect, but there is a reason why well over 100,000 people from around the world have joined our project and over 1,000,000 visited our site just in the past year. We don't aim to be the most scientifically rigorous, we aim to be the most accessible. All scientists start of as amateurs, and our ultimate goal is to inspire as many amateurs as possible to learn more about our planet's incredible biodiversity. I think you can play a big role in helping us accomplish this goal and don't let anyone else tell you otherwise. Cheers, Yasser

Alex,We are sorry about what happened. i tis particularly hard for you since you love mushrooms so much. I t really reduces your fun and enthusiasm when your friend leaves. But your friend had to leave because he was interested in doing more detailed work at a more advanced level. He has joined many sites. Maybe you can also join one of those sites.
http://mushroomobserver.org/observer/sho...
He is still with mushroom observers and has given about 2500 specimens.
So you can join that site But Do NOt Leave Us!

for everyone who saw the previous comment: after a little chat, will i take me at least still some time to make my final decision.

for all people, who think they have seen similiar fungi like in my collection, please take a last look in the next 2 h: maybe you find a match, a long searched id or just some nice pictures. I will go after that!!!

...and why didn't I favorize this spotting earlier?? Brilliant one, Alex.

I don't think I am going to start a slime mold mission, arlanda - not an expertise of mine.
Plus, Clive was and is still right - there are categories missing. In fact, the PN system is pretty far away from a good category-system. That must have been said.

Arlanda it came just NOW into my mind. YOU have also more than 70% the good id at slime molds. But here are also few other canditates: tim sage.- fluffb.- julieEdwards - gary lincoff - shebebusynow. I'm just a guy who is lucky when i go through my favorited "main-reference sites" which i always try to share with everyone !!!

thanks you 2 !! Arlanda: To be really/100% honest: i dont know how long i'm still here and i think lars would need some more intrest at the educational site (some books.....), then you can also take emma for our fungi-id, i will then id birds (there is emma good in) {when remember good} :) {sorry when i come a little bit rude over, but today isn't my day} [my teacher is gone :( ] (i still have some fun)

This is an amazing picture, i love the 2 different colors

Alex, I think you or LarsKorb are the more indicated to start it

DOES NOT SOMEONE ELSE WANT TO START/CREATE A SLIME MOLD MISSION ???

AlexKonig there is really an surprising and nice collection nice to see them,
any Idea about this one, http://www.projectnoah.org/spottings/829...

and 59 other people favorited this spotting