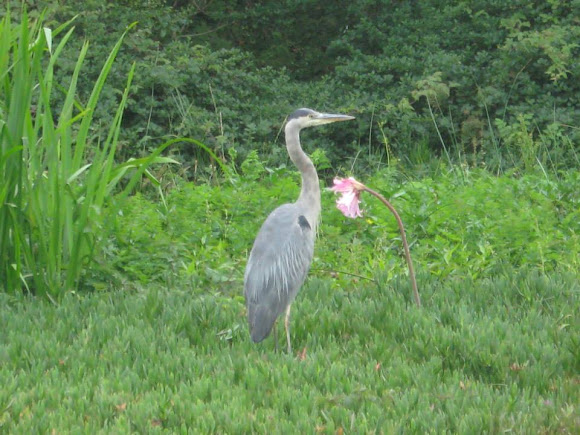 At over a metre and half in height, the great blue heron is the largest heron in North America and one of the continent's most recognisable wading birds (2) (3). There are two main colour morphs of this statuesque species: a dark form that is mostly blue-grey, with chestnut thighs, and a white cap over a black eye stripe that merges into long, black plumes; and a light form which is all white. The neck, legs and wings are characteristically long, the tail is short, and the yellowish bill is thick, elongate and tapered. In flight, it coils its neck back into a distinctive s-shape, extends its legs back along its body axis, and beats its wings with steady, powerful strokes (2) (3) (4). Although the sexes are similar in appearance, the female is normally around ten percent smaller than the male, while juveniles are duller and lack the long plumes of the adults (4) (5). Considerable uncertainty surrounds the separation of subspecies of the great blue heron, with between two and seven recognised for North America alone (4). However, five main subspecies, that differ in size and plumage and occupy different parts of the species overall range, are commonly referred to: Ardea herodias herodias, A. h. fannini, A. h. wardii, A. h. occidentalis (the white form), and A. h. cognata (2) (4).

Great Blue Herons live in both freshwater and saltwater habitats, and also forage in grasslands and agricultural fields, where they stalk frogs and mammals. Most breeding colonies are located within 2 to 4 miles of feeding areas, often in isolated swamps or on islands, and near lakes and ponds bordered by forests.

Went on a walk from my house down past the pond, towards a section of natural bridges state beach. On my way down there I noticed this beauty in the iceplant. Was lucky enough that it kept still for a picture too.

@Atonio Thank you kindly, I first came across Project Noah a while ago but didn't create an acount until relatively recently. I am a huge fan of citizen science programs, as my field of interest in science lays mostly in biology I feel it's going to be a good fit.

I haven't had time to look through the Faq yet but I do appreciate you bringing it to my attention, I hope I haven't broken any rules? i have started following the blog, and have already created my own mission that I'm excited to work on. Thank you for the message :)

Welcome to Project Noah AlexanderKaliczak
Nice first spotting,congrats and thanks for sharing
We hope you like the site as much we do; there are many features you can explore:
We invite you to go to http://www.projectnoah.org/faq where you will find the purpose and “rules” of Project Noah.
There is a blog http://blog.projectnoah.org/ where we post articles from spotters with special insight into different organisms.
There are also the chats for help with identification, and to comment on your own and others’ spottings.
Look at the global and local missions to put your spottings into: http://www.projectnoah.org/missions