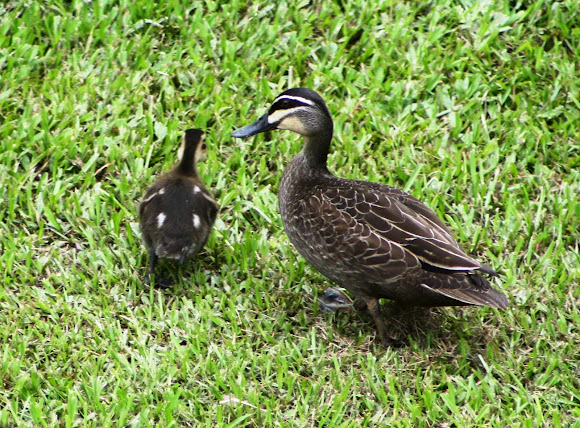 It has a dark body, and a paler head with a dark crown and facial stripes. In flight, it shows a green speculum and pale underwing. All plumages are similar. The size range is 54–61 cm; males tend to be larger than females, and some island forms are smaller and darker than the main populations. It is not resident on the Marianas islands, but sometimes occurs there during migration. The now extinct Mariana Mallard was probably originally derived from hybrids between this species and the mallard, which came to the islands during migration and settled down there.

The Pacific Black Duck (Anas superciliosa) is a dabbling duck found in much of Indonesia, New Guinea, Australia, New Zealand, and many islands in the southwestern Pacific, reaching to the Caroline Islands in the north and French Polynesia in the east. This sociable duck is found in a variety of wetland habitats, and its nesting habits are much like those of the Mallard, which is encroaching on its range in New Zealand. It feeds by upending, like other Anas ducks.