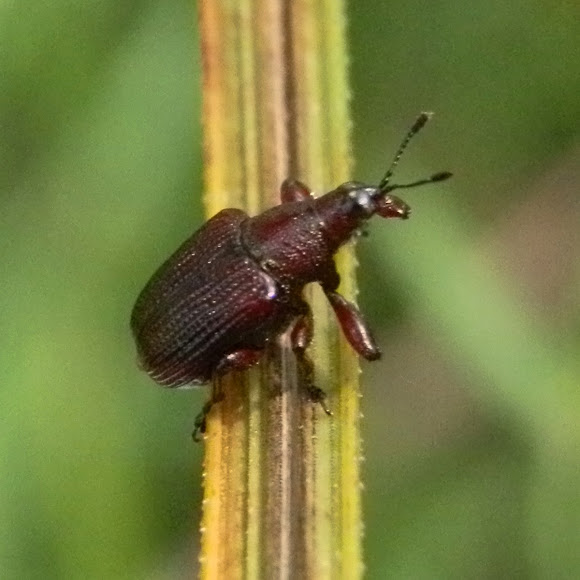 A 6 mm long reddish brown weevil with rows of pitting and ridges along the length of the elytra. The thorax was elogated and cylindrical. The rostrum/snout was very short and down-pointing. Antennae were short, straight and clubbed. Femurs were noticeably thick.
. A later spotting of another set of weevils was on a young manna gum. there were about 6 of them. One of them was clinging on to a cut piece of leaf (pic 2) and on the plant were at least two leaf rolls (pic 3). Young leaves showed extensive damage (pic 4)

fist specimen was spotted on a blade of grass under a eucalyptus tree (probably fallen off the tree) in a national park. The second was seen in a botanical garden on manna gum ( Eucalyptus viminalis)

The beetles of this family are known as leaf-rollers because they have been observed rolling leaves to hold their eggs, smearing the insides with a special secretion and then injecting fungal spores . The fungi might breakdown plant material making it more disgestable to the developing larvae. It is not known that if such treatment of the nidus improves the nutritional value of the leaf tissue. Fungal spores are collected in special structures between the metathorax and the abdomen, called mycangia.
The leaf-rolling behaviour has been observed and recorded in species overseas. One species of Euops in Australia has been seen rolling leaves but not much else is known of the species in Australia.
I had to add the photo of the nidus (as the egg case is called) as this is what igves the weevil its name. Also a fascinating behaviour.
A link from Uni of Florida explains this
http://entnemdept.ufl.edu/creatures/misc... There is a lovely spotting from India by Surekha
http://www.projectnoah.org/spottings/373...
Family: Attelabidae

The fungal connection is pretty amazing too

Thanks Martin. Seeing the Nidus was definitely something special.

Thanks Ernst. Would have loved to see him in action.