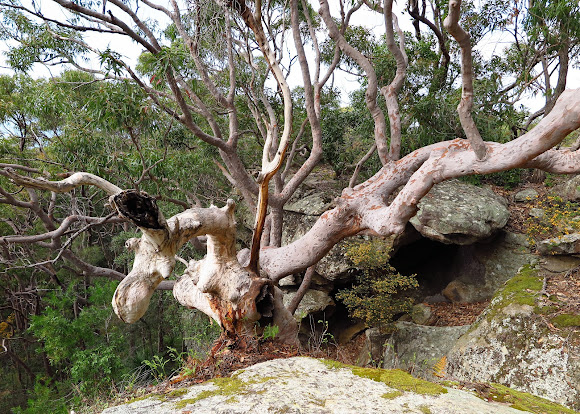 I am always fascinated by the texture of the bark on Sydney Red Gums, but this particular specimen caught my eye because of its unruly behaviour and beautiful location - It is a quintessentially Australian native that is perfectly adapted to harsh conditions. The base of the tree looked like it was actually growing out of the rock, so it definitely has a firm foothold. Also known as the Smooth-barked Apple, Rose Apple and Rose Gum, this species differs from the majority of gum trees in that it is not a Eucalyptus, but rather a closely related genus.

This is a very important tree for fauna with respect to hollow log formation in older specimens which are used by many species of vertebrate fauna for both breeding and roosting, possums being one example. The nectar is a major source of food for many species including numerous invertebrates, flying foxes, and the seeds eaten by parrots.

Thanks, Martin. Yeah I thought it looked familiar.

Yes, it reminds me of the roads in sydney :)

Thanks, Mark. Very Sydney in the sense that it's beautiful, and out of control. Gotta love it :-)

Fantastic specimen and shots Neil. They really are so 'Sydney'.

Cheers, Leuba. These are awesome trees. I'm still searching for the weirdest red gum ever. I know it's out there....

Great spotting Neil. Love the way the tree rises from the rocks and the twists and turns. NSW has some great gums !