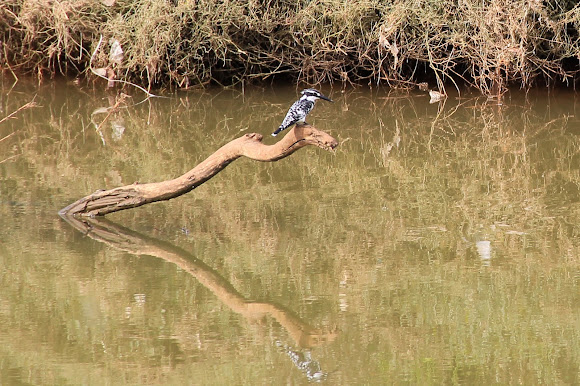 This kingfisher is about 17 cm long and is white with a black mask, a white supercilium and black breast bands. The crest is neat and the upperparts are barred in black. Several subspecies are recognized within the broad distribution. The nominate race is found in sub-Saharan Africa, extending into West Asia. A former subspecies syriaca is considered as merely a larger northern bird of the nominate species (following Bergmann's rule). Subspecies leucomelanura is found from Afghanistan east into India, Sri Lanka, Thailand and Laos. The subspecies travancoreensis of the Western Ghats is darker with the white reduced. Subspecies C. r. insignis is found in Hainan and southeastern China and has a much larger bill. Males have a narrow second breast-band while females have a single broken breast band. (https://en.wikipedia.org/wiki/Pied_kingf...)

t is common throughout sub-Saharan Africa and southern Asia from Turkey to India to China. It is resident, and most birds do not migrate, other than short-distance seasonal movements. In India it is distributed mainly on the plains and is replaced in the higher hills of the Himalayas by Megaceryle lugubris. The pied kingfisher is estimated to be the world's third most common kingfisher, and being a noisy bird, hard to miss. (https://en.wikipedia.org/wiki/Pied_kingf...)