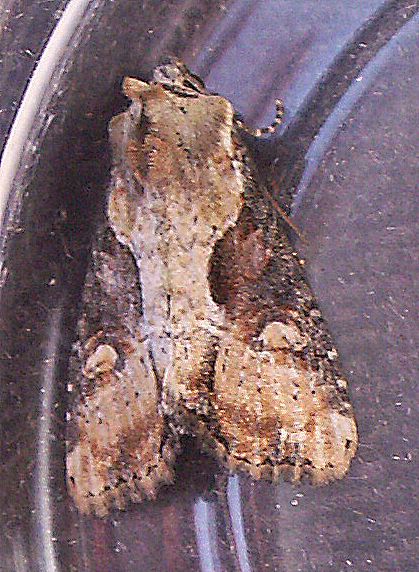 Doubled lobe moth's are found in damp woodlands, wet meadows, marshy areas. Doubled lobe moth's are found in Europe. There are at least two separate introductions into North America (Troubridge et al. 1992) and it is now rapidly expanding in range. Inhabiting fens, damp woodland and other marshy places, this moth has a widely scattered distribution over most of England, Wales and southern Scotland. It is local in Ireland. Double lobe moth's are also found in British Columbia, and from Manitoba to New Brunswick plus adjacent U.S. states, NY, OH, VT, WI.

This Double lobe moth is a live moth that was attracted to a standard bulb lamp I placed outdoors after midnight near our mixed woods forest edge. The lamp was placed to attract moth's. It was a challenge to identify this moth using my State as a moth species search perimeter. After I expanded my search to global using descriptors I found a visual match under moths of Europe. Using that info I found information to include this species in the USA and more appropriately my own home State of Washington. This Double lobe moth has a very unique shape which I enjoyed discovering under the macro lens setting of my camera.