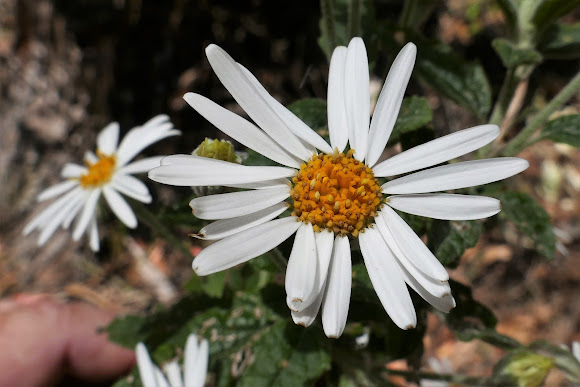 Large Daisy Bush is a native Australian shrub that grows to a height of about 1.6 metres, and is a member of the daisy family Asteraceae. It is an endemic species to eastern Australia. Flowering is usually between August and December. Plants produce typical daisy-type flower heads, with the central flowers being primarily yellow to orange, surrounded by white ligules. Olearia gravis can be confused with Olearia canescens (Grey Daisy Bush) which also occurs in Girraween National Park, although the latter has the potential to grow much larger in height, despite its similarities. Goats have been known to browse this species. Inappropriate fire regimes are also a threat as the species is killed by fire and regenerates from soil stored seed bank. Land clearing is also another threat.