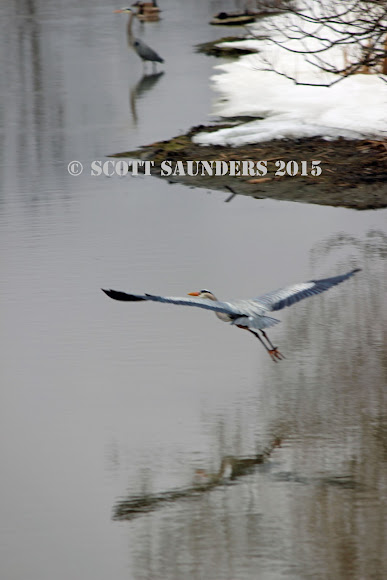 It is the largest North American heron and, among all extant herons, it is surpassed only by the Goliath heron (Ardea goliath) and the white-bellied heron (Ardea insignis). It has head-to-tail length of 91–137 cm (36–54 in), a wingspan of 167–201 cm (66–79 in), a height of 115–138 cm (45–54 in), and a weight of 1.82–3.6 kg (4.0–7.9 lb).[4][5][6][7] In British Columbia, adult males averaged 2.48 kg (5.5 lb) and adult females 2.11 kg (4.7 lb).[8] In Nova Scotia and New England, adult herons of both sexes averaged 2.23 kg (4.9 lb),[9] while in Oregon both sexes averaged 2.09 kg (4.6 lb)[10] Thus, great blue herons are roughly twice as heavy as great egrets (Ardea alba), although only slightly taller than them, but can themselves weigh about half as much as a large Goliath heron.[11] Notable features of great blue herons include slaty (gray with a slight azure blue) flight feathers, red-brown thighs, and a paired red-brown and black stripe up the flanks; the neck is rusty-gray, with black and white streaking down the front; the head is paler, with a nearly white face, and a pair of black or slate plumes running from just above the eye to the back of the head. The feathers on the lower neck are long and plume-like; it also has plumes on the lower back at the start of the breeding season. The bill is dull yellowish, becoming orange briefly at the start of the breeding season, and the lower legs gray, also becoming orangey at the start of the breeding season. Immature birds are duller in color, with a dull blackish-gray crown, and the flank pattern only weakly defined; they have no plumes, and the bill is dull gray-yellow.[3][12][13] Among standard measurements, the wing chord is 43–49.2 cm (16.9–19.4 in), the tail is 15.2–19.5 cm (6.0–7.7 in), the culmen is 12.3–15.2 cm (4.8–6.0 in) and the tarsus is 15.7–21 cm (6.2–8.3 in).[14][15] The heron stride is around 22 cm (8.7 in), almost in a straight line. Two of the three front toes are generally closer together. In a track the front toes as well as the back often show the small talons.[16] The subspecies differ only slightly in size and plumage tone, with the exception of subspecies occidentalis, which as well as normal colored birds, also has a distinct white morph, known as the great white heron (not to be confused with the great egret, for which "great white heron" was once a common name). It is found only in south Florida and some parts of the Caribbean. The great white heron differs from other great blues in bill morphology, head plume length, and in having a total lack of pigment in its plumage. It averages somewhat larger than the sympatric race Ardea herodias wardi and may be the largest race in the species. In a survey of A. h. occidentalis in Florida, males were found to average 3.02 kg (6.7 lb) and females average 2.57 kg (5.7 lb), with a range for both sexes of 2 to 3.39 kg (4.4 to 7.5 lb).[4] This is mainly found near salt water, and was long thought to be a separate species. Birds intermediate between the normal morph and the white morph are known as Würdemann's heron; these birds resemble a "normal" great blue with a white head. The theory that great white heron may be a separate species

The great blue heron is found throughout most of North America, as far north as Alaska and the southern Canadian provinces. The range extends south through Florida, Mexico and the Caribbean to South America. Birds east of the Rocky Mountains in the northern part of their range are migratory and winter in Central America or northern South America. From the southern United States southwards, and on the Pacific coast, they are year-round residents.[3] However their hardiness is such that individuals often remain through cold northern winters, as well, so long as fish-bearing waters remain unfrozen (which may be the case only in flowing water such as streams, creeks and rivers). The great blue heron can adapt to almost any wetland habitat in its range. They may be found in numbers in fresh and saltwater marshes, mangrove swamps, flooded meadows, lake edges, or shorelines. They are quite adaptable and may be seen in heavily developed areas as long as they hold bodies of water bearing fish. Great blue herons rarely venture far from bodies of water but are occasionally seen flying over upland areas. They usually nest in trees or bushes near water's edge, often on island (which minimizes the potential for predation) or partially isolated spots.