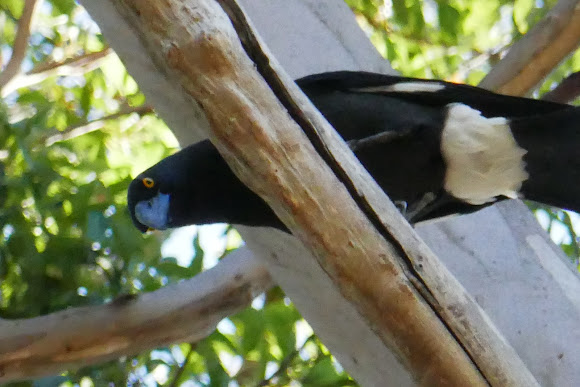 The "pied currawong" (Strepera graculina) is a medium-sized black passerine bird native to eastern Australia and Lord Howe Island. One of three currawong species in the genus Strepera, it is closely related to the butcherbirds and Australian magpie of the family Artamidae. Six subspecies are recognised. It is a robust crow-like bird averaging around 48 cm (19 in) in length, black or sooty grey-black in plumage with white undertail and wing patches, yellow irises, and a heavy bill. The male and female are similar in appearance. Known for its melodious calls, the species' name currawong is believed to be of indigenous origin. (Wikipedia)

Spotted at Mt. Gravatt Cemetery, Brisbane, which is adjacent to Toohey Forest Conservation Reserve, a woodland reserve of approximately 655 hectares. Vegetation in the cemetery is largely native species, and in this area it is remnant eucalypt forest. They particularly like heavily-wooded areas, and that's usually when I'll see a bird or two.

I really enjoy these birds. They are confident, beautiful, and very inquisitive, and I love their songs. Much like the kookaburra, the currawong song is an iconic Australian bush sound. This recording is excellent.... https://www.youtube.com/watch?v=-gPCa53J... The fellow in this spotting was busy investigating a big split in a bough that was high up in the tree, no doubt looking for grubs and other insects. My neck and right shoulder was aching as I tried to get some decent photos, but I could only view from one awkward position looking straight up, and eventually had to give up and walk away. Such a pity because it was the only currawong I saw all day.

Thanks, Hema. Yes, me too! The forest is nearby, so he's a happy fellow :)

I would sing like that if I was in those lovely surroundings!!

Mine too! I love to see them, and it's always when there's plenty of bush around. That's usually the common denominator for me and currawongs!

These are a favourite of mine