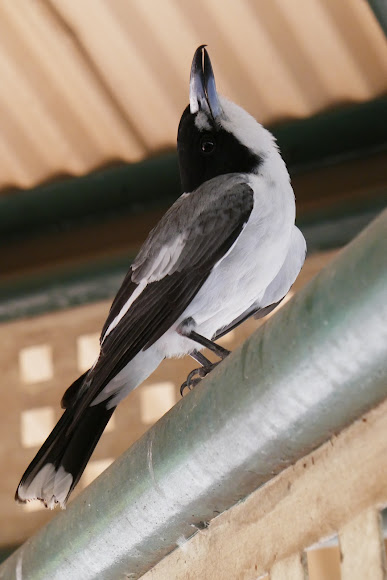 The "grey butcherbird" is an Australian native songbird that belongs to the passerine bird family Artamidae. Adult birds have black, white and grey plumage, and it's similar for both sexes, although the females are slightly smaller than the males. Young birds resemble the adults, but have black areas replaced with olive-brown and a buff wash on the white areas, and the most obvious sign of a juvenile is it does not have a black head. There are three subspecies (see wiki ref.), and other birds in the same family include the Australian magpie, the currawongs, woodswallows and other members of the butcherbird genus Cracticus. PS: Both references have a brief recording of the butcherbird's "rollicking" call, and both are definitely worth a listen.

Spotted at Mt. Gravatt Cemetery, Brisbane, which is adjacent to Toohey Forest Conservation Reserve, a woodland reserve of approximately 655 hectares. Vegetation in the cemetery is also largely native species, and there are plenty of massive eucalypts on the grounds.

This was a friendly little bird, but it wasn't particularly interested in me, nor was it looking for handouts. Rather, it was on the lookout for moths and other insects around the skylight of this shelter, hence the upturned head. It came, it looked, it went... it was that simple!

Thanks, Deny. They are lovely birds. I really like them :)

Thanks, Mark. They are wonderful birds, and I totally agree they are great entertainers. Guaranteed I will see a bird or two when I'm mowing! The recording is excellent too!

Love that first shot. These are our alarm clocks. We have 4 (two generations) at our back door currently and they yell out to get us up each morning. Then they put on a fabulous display of aerobatics as we throw morsels into the air. Great entertainment.

Thanks, ornithoptera80. It's always a pleasure to see these birds, and I particularly like their songs. They sing duets to their partners - one starts the song and the other finishes. I had three pairs that frequented my yard a few years back, and it was by their calls that I figured out who was who. Took me ages :/

But not painted by me. I'm better with a roller!