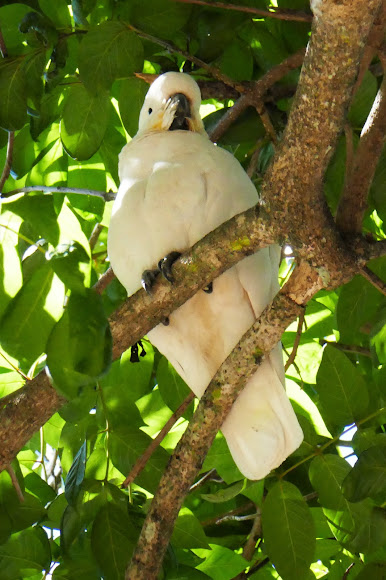 Cacatua galerita galerita, commonly known as the "greater sulphur-crested cockatoo", is a large white parrot that belongs to the family Cacatuidae. It is one of four subspecies, this one being endemic to Australia's east coast from Cape York in FNQ to Tasmania, and west to Adelaide (see references). It has a dark grey-black bill, a distinctive sulphur-yellow crest and a yellow wash on the underside of the wings. Sexes are similar, although the female can be separated at close range by its red-brown eye (darker brown in the male). Juvenile birds resemble the adults. This is a noisy and conspicuous cockatoo, both at rest and in flight. In some parts of Australia, these birds can be very numerous and may cause damage to cereal and fruit crops, newly planted tree seedlings, and soft timber on houses, decking, and outdoor furniture. PS: What is a group of cockatoos called? The proper term for a group of cockatoos, as defined in the Macquarie (dictionary?), is "a bloody nuisance!" I laughed out loud when I read that, and despite the sentiment being accurate, it is not necessarily true! I think the correct collective noun for a group of cockatoos is "a crackle".

Spotted at Mt. Gravatt Cemetery, Brisbane, which is adjacent to Toohey Forest Conservation Reserve, a woodland reserve of approximately 655 hectares. Vegetation in the cemetery is largely native species, but also a scattering of imported species like Cinnamomum camphora - camphor laurel, which I'm pretty sure is the tree in this spotting. The species is a significant environmental weed in this country, but the trees do provide a safe roost with plenty of shade. There are also plenty of lawns to graze upon.

I have most likely encountered these two individuals before, but under totally different circumstances, as members of their group (crackle). I travel along the busy arterial roads in this area, particularly during the morning hours, and see numerous cockatoos flying between treetops, rooftops, lamp posts, road signs, etc., and they have a tendency to swoop low and fly amongst the traffic. It is nerve-racking to watch, and birds do get hit and killed by motor vehicles! For animals that are so intelligent, their behaviour is reckless and can only be described as the cockie version of the game "chicken!" :-(

Thanks, Deny. I just happened to look up. Early morning and late afternoon is their raucous time. These ones were very quiet.

They do, Kalen. A very popular pet, and a very long-lived one too. I'm definitely not a fan of keeping birds in cages!

do people keep them as pets

Thanks, ornithoptera80. A lucky find - I just happened to look up! There could have been 20 birds up there and I wouldn't have known, they were that quiet!

Thank you, gents, for you comments. Much appreciated. Mark, now I want some chocolate crackles!!

Hmm.. so a group is a crackle eh. I would have called it a SCRAAAARK.
If you run out of crackles we have a few spares around here.
Great spotting bud.

Such an incredible spotting! Thanks for sharing, Neil!