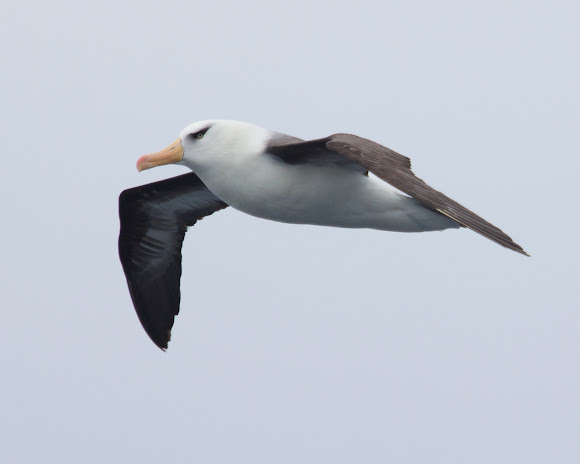 A medium sized albatross (78-90cm / 2.2-3.8kg). White with black upper wings and black/white under-wing. Adults show an all yellow bill with a pink/orange tip. Also a black supercilium (eye stripe) and a pale eye. The eye is diagnostic when comparing this species to the very similar Black-browed Albatross.

Endemic breeder to New Zealand with colonies on the Campbell Island group. Disperses through South Pacific, Tasman Sea and Ross sea. Records show as vagrant through the circumpolar region. In New Zealand waters can flock in large numbers esp. behind fishing vessels etc.

These birds recorded in the Southern Ocean between Snares and Auckland Island groups. The last image is of a sub-adult showing the dark tip to the bill rather than the pink of a breeding adult and the darker under-wing.

Thank you Polilla. They are not the most colourful of birds as a group, but their majesty as they ride over the waves of a windswept ocean is undeniable.

Thank you so much Joshua. I like to study endemic spieces where I can. The whole sea bird thing fascinates me and I think they are good indicators to the health of our oceans. I am very happy you appreciate this work.

Absolutely stunning! I've never heard of this species. Your work in documenting Endemics like this one is very important