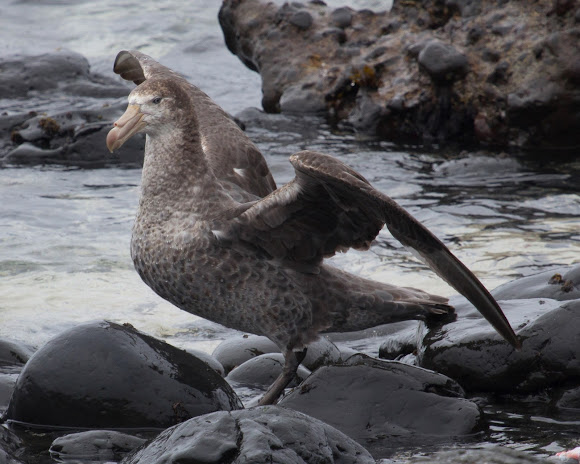 A very large (80-95cm - 3.8-5.0kg) petrel. Usually mostly brown body and grey/brown mottled neck and head although some lighter plumage's exist and some feather bleaching does occur. The cream coloured bill is very heavy with well pronounced single nasal tube and characteristic red/orange tip to both mandibles. Eye is brown but pales with age to light yellow/white.

Found around all of the New Zealand coast. Breeding colonies on many sub antarctic islands throughout the warmer parts of the circumpolar region and disperses as far up as the sub tropical oceans. This spieces can be quite gregarious. These birds photographed in the Auckland Island group. The last image shows an adult displaying dominance over a sea-lion carcass.

Often confused with the Southern Giant Petrel. The key is the bill tip which in all cases apart from newly fledged birds is red/orange in the Northern and blue/green in the Southern. Southern are also slightly bigger, usually lighter coloured as adults (have a white morph - see later entry) and adults also usually show a white leading edge on the upper wing.

Thank you Everyone is awesome. Appreciate your feedback.

Thank you Joshua, much appreciated. No i havent been to that island, in fact I have only been to the USA twice in my life many years ago but I am probably overdue a visit. Is the Scrub Jay a special bird?

Everyone is awesome 5 years ago

Everyone is awesome 5 years ago

Have you ever been to Santa Cruz Island off of California for the Island Scrub Jay?