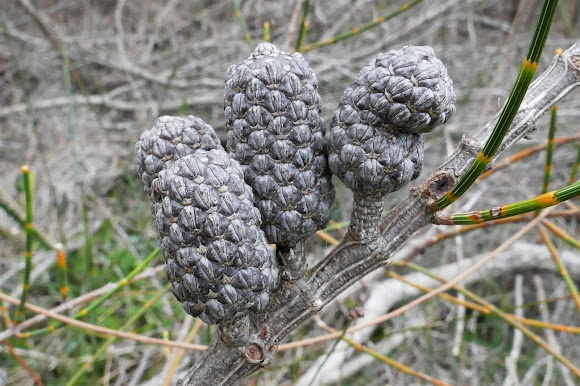 Allocasuarina paludosa, commonly known as the "swamp she-oak" or "scrub she-oak", is a woody shrub of the family Casuarinaceae, and is endemic to south-eastern Australia. Plants can grow as trees or shrubs up to about 3 metres high, and are notable for their long, segmented branchlets that function as leaves. Formally termed cladodes, these branchlets somewhat resemble pine needles, although she-oaks are flowering plants. The leaves are reduced to minute scales encircling each joint (which you can see in the 1st photo). Fallen cladodes form a dense, soft mat beneath she-oaks, preventing the development of undergrowth (a phenomenon known as allelopathy) and making she-oak woods remarkably quiet. Another characteristic feature are the spiny cones, about the size of an acorn but with a texture more resembling a conifer cone. However, she-oak cones are a woody fruit. Male specimens bear no fruit and are sometimes colloquially referred to as a "he-oak". (Wikipedia)

Bouddi National Park on the NSW Central Coast. The park has mixed vegetation, but this area was mostly windswept heathlands. Coastal, so very salty air and sandy soils. Here's some park info: http://www.environment.nsw.gov.au/nation...

She-oaks are usually found growing in sandy and other poor soils, and like peas and beans, are able to ‘fix’ nitrogen in the soil through nodes of symbiotic bacteria on their roots. This is critical for other species that depend on this natural fertiliser to grow in Australia’s poor soils.

Thanks, Maria. Such an unusual genus. I find them fascinating!

What an interesting plant - thanks for sharing!

Cheers, Mark. I appreciate the nomination :)

Thanks, Tukup. She-oak is yet another example of Australia's quirky wildlife.

I clicked on the thumbnail expecting to see a cactus. My eyes aren't real good 😊 What an interesting plant. Thanks for the great description and notes, as usual, Neil.

Thanks, Brian. The various she-oak species are quite amazing. This one is typically heath-like and does really well in windswept environments.