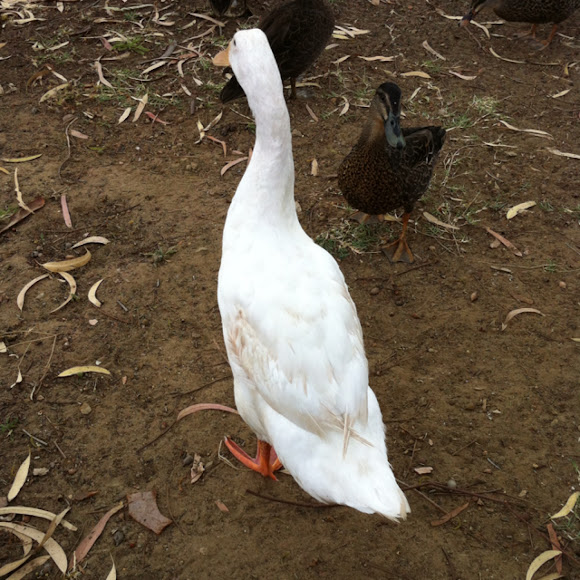 An extraordinary looking duck, it is characterized by an extremely short Femora, the thigh or upper bones of the legs, with consequence that their feet are not brought, as other ducks, under the middle of the body, but are placed much farther behind. This means that to bring the duck's centre of gravity over the point of support (its feet), the duck must assume an erect attitude, like that of a penguin (in the past it has been mistakenly called a Penguin Duck). It is known for its colour scheme of brown, grey, green and white. In size they can be up to 14 inches (36 cm) tall and can weigh around 3–5 lb (1.4–2.3 kg), the drakes being heavier than the hen.

Observed at the Old Port Reach Reserve (Grange, Adelaide, South Australia) not far from Charles Sturt's Cottage. This is generally a slow moving water way with patches of reeds here and there, very close to Grange Primary School and busy Jetty St situated in suburban Adelaide. Indian Runners love foraging. They also like swimming in ponds and streams, but they are likely to be preoccupied in running around grassy meadows looking for worms, slugs, even catching flies. They appreciate open spaces but are happy in gardens from which they cannot fly and where they make much less noise than call ducks.

Diet: The breed does not require the same food intake as the larger breeds, and the Indian runner likes nothing better than foraging for tidbits amongst ground cover and foliage, this will include a lot of slugs and worms and insects found in the grass and streams. It will also include greens, such as grass and duck-weed and with this in mind are also bred on farms for their natural pest control abilities. Runners in captivity should be given calcium and protein-rich food, especially during the extensive laying season. Call: Only the females quack. All drakes are limited to a hoarse whisper. Information came from: http://www.heritagehatchingandhens.com.a... And http://www.borderhauss.com/ducks.html This duck and it's mate we're dumped in our local creek, so no longer captive. You can see in this image damaged webbing of the left foot, however all told they have made a fools life for themselves at the creek with the locals :-)