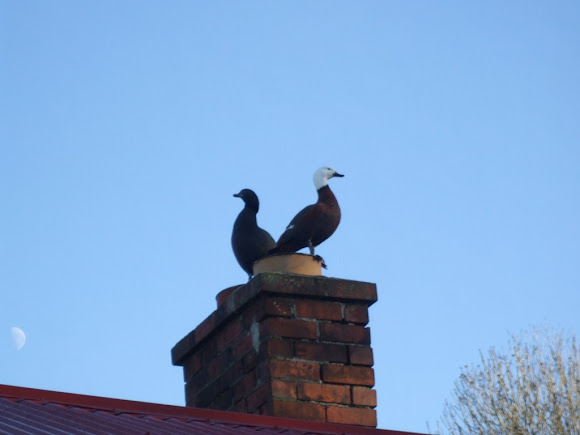 A tadorna variegata pair, on my neighbour's chimney, examining the area, ahead of the breeding season. They stayed there for a couple of hours, and they left , probably to search for a better spot. The spcies is endemic to New Zealand and before the Europeans settled in the islands, the Māori hunted Paradise Shelducks in favoured districts. Hunting was done outside the breeding season when the birds were molting and could not fly. During the breeding season hunting was forbidden. They are a game bird, in NZ. I just hope those two at least, managed to survive through the "duck seasons".

In 2010 September 4, during Christchurch's 7.1 earthquake, the chimney fell, fortunately nobody in the house was hurt.

Thank you, dear @LuisStevens , and have a nice evening :)